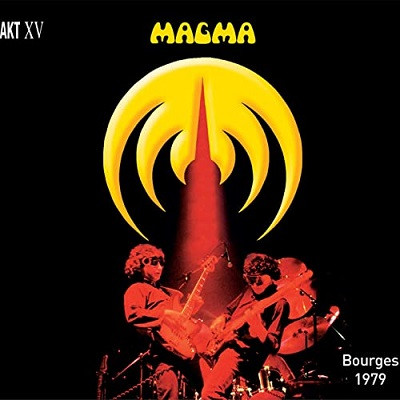 Originally released in 2008 as AKT XV: Bourges 1979, this new re-release from the Seventh Records label of Magma’s performance on April 17th, showcases the intensity the group were heading towards. At the time, they were promoting their seventh studio album, Attahk which was released a year earlier. The band which was known for its dangerous avant-garde classical jazz orientated operatic sounds, were moving into a Soul/R&B, Funk, and Gospel approach.

This live recording which had suffered before from the original tapes, has been reworked and restored. Listening to this live recording, the challenges that Magma were doing between them and the audiences that night in Bourges, were into a frenzy from the moment they went on stage in 1979 by bringing more thunderstorms on the AKT XV release.

With ‘Retrovision’ it has this intense exercise workout between the drums and bass. The synths increases the temperature levels for Vander, Michel Herve, and Jean-Luc Chevalier as they get their marks set, and head into this incredible race. They travel towards the sections between Stanley Clarke, The Mahavishnu Orchestra, and the Hot Rats-era of Frank Zappa.

Elsewhere, the vocalists raise the roof as if the Bourges crowd are inside the Kobaian church by getting the crowd to get out of their seats and have them participate in a journey they will never forget. Crazy time changes, guitars going from section to another, train chugging into the unknown tunnels, and Vander becoming like Stravinsky, you can feel an explosion waiting to hit at any second.

The live version of ‘The Last Seven Minutes’ is where the audiences are on this fast-driven roller-coaster ride as Magma’s instruments duel it out into a sword-like battle. Vander scats like crazy as Stella channels the late great Aretha Franklin. While Liza and the late Maria Popkiewicz honor the vocalizations of Janis Joplin’s arrangements, they help Stella out as Herve’s synths roll into ‘The Noonward Race’ between Chevalier’s bass lines and walking into Herbie Hancock’s territory of the Headhunters-era.

They are really cookin’ now! This time the ingredients that they’ve made on the live version, knocks the studio version out of the ball park as they made it more dangerous to get the Bourges crowd up-and-running.

Named from the fourth track ‘Liriik Necronomicus Kahnt (In which our heroes Urgon & Gorgo meet)’, ‘Ürgon Gorgo’ carries a lot of ammunition as they travel towards the Tamla/Motown arc of the rhythm section for Marvin Gaye’s ‘I Heard It Through the Grapevine’ and Steely Dan’s ‘Josie’.

Rising guitar riffs, bass solo, keyboards, and Vander’s drums filling up the space for another workout session, Jean’s bass comes in as Christian gives him carte blanche throughout the section. He plays the bass like a robotic mastermind that has been brought to life. Between him and Michel Herve, it’s a combination between Jaco Pastorius, Black Sabbath’s Geezer Butler, and Funkadelic’s Bootsy Collins, they can take it up a notch before honoring Jannick Top’s riffs from ‘De Futura’ as giving the crowd a big giant approval for what they’ve done to get their money’s worth.

‘Korusz XXVI’ closes the first set as Vander and tenor saxophonist Rene Garber (Révérend Stündëhr) lends Magma a helping hand. For me as I’ve mentioned this in an earlier review, Magma aren’t just a band, but more like a family as they bring some of the alumni’s a helping hand which is included on Retrospektïẁ.

By honoring the spirituality of John Coltrane’s arrangements, they’re continuing where they left off with A Love Supreme. Vander takes over throughout his kit as you can hear the crowd cheering him on. I mean, there’s not a stop sign for him as they clap along to the beat. He scats like crazy while playing in melodic timing and his playing goes into some insane extremely hard level throughout the piece.

Both the energetic ‘Hhaï’ and the finale of ‘Mëkanïk Dëstruktïw Kömmandöh’ which closes the second set by clocking in at 29 minutes, ‘Nono’ sees Magma bring in the funky grooves from the bass. Creating their own version of the Mothership from George Clinton a-la Zeuhl style, Klaus’ snarling vocals brings everything to a departure as they return to the Kobaian planet once more.

Klaus screams like The Crazy World of Arthur Brown as the bass and drum work well together as if they had one more electrical spark to bring everything to a stand still before laying down some lines of returning towards Hancock’s territory once more with some ‘Chameleon’-esque synth solos that would’ve made Herbie appreciate the Zeuhl masters very well.

The Bourges live recording is one of the most insane and electrifying reissues that sees the band at their peak during the Attahk-era. So if you are new to Magma, or admire Retrospektïẁ, Live/Hhaï, and the live material they’ve done at the Marquee along with a session they did for John Peel in 1974, Bourges 1979 is to be played at maximum volume.