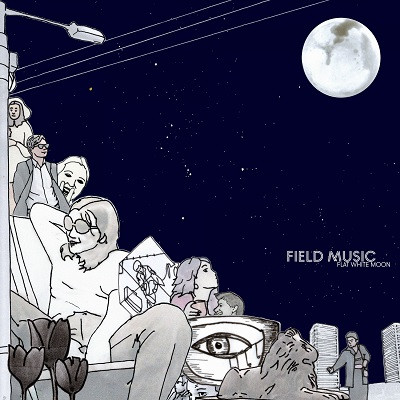 Among supporters including Prince, Field Music have a very different vibration on how they handled the Pop genre. Brothers David and Peter Brewis have been around since their formation in Sunderland, England 17 years ago. With seven albums in the can, the Brewis brothers have some appreciation not just in the Art Pop world, but in the Prog community as well.

But they aren’t just a Prog band, it’s quite an adventure that the duo take the listener on a magic carpet ride they’ll never forget. That and their eighth studio album, Flat White Moon released on the Memphis Industries label, has these various sounds of; Baroque, New Wave, West Coast California Sound of Asylum Records, Smooth, Swirling Psychedelia, Glam, and Soul/R&B.

And it’s all right there. It showcases a grooving and mellowing release that at times would make you want to hit the dance floor at any second. ‘Orion From The Street’ sets the countdown for ignition with this concerto piano loop. Tackling with living in the afterlife with some romantic arrangements, it has some comparisons to the electronic duo, Silver Apples.

Elsewhere, ‘Do Me a Favour’ dives between the singer-songwriting styles of Jackson Browne and the Hunky Dory-era of David Bowie. Also featuring some acoustic driven fanfare riffs as ‘You Get Better’ is a tribute to Prince’s Sign O’ The Times-era. Funky-Prog-Pop orientations, the bass climbs up and down with some scat-singing and clapping sections by raising the roof up with these high vocal arrangements.

‘Meant to Be’ is a late ‘60s psychedelic garage rock composition. Like something straight out of Lenny Kaye’s Nuggets compilation, it goes into the unknown as it features some dueling riffs with a string section that has this Mellotron-esque atmosphere. The mellowed punching rhythms on ‘In This City’ has some of these jazzy sequences that go before and after during the sections of the song as ‘No Pressure’ calms the mood.

With its Jeff Lynne meets Ray Davies textures in the vocals, there’s a moment where you have this intense bass riff intro, post-rock drum beats, and swimming keyboards that takes you into the Victorian cities of London during its Steampunk-era as ‘I’m The One Who Wants to Be With You’ features some rumbling sections of Glam-tinged guitars. The drumming and bass lines follow the vocals to hit the disco grooves before it transforms into this Baroque rising section and going back into the funky bass lines near the end.

‘Invisible Days’ recalls both Paul McCartney & Wings’ Wings at the Speed of Sound and Stackridge’s The Man in the Bowler Hat. The Brewis Brothers go into this cat-and-mouse chase that becomes a mid-challenge returning back into the Baroque-pop orientation. You can just close your eyes and imagine yourself watching Field Music performing this song to bring the house down in the Royal Albert Hall to a sold-out crowd one day.

Listening to Flat White Moon was a real challenge for me. Whether you get it or not, Field Music’s sound can be quite the challenge. It shows how much homework they have done and the accomplishments they did with their eighth studio release.

It’s joyous, fun, surreal, and ready to go. While I’m not a big fan of the band’s music, they really up their levels for 2021. So who knows where the next adventure will be for the Brewis brothers as they came back from Earth and had an amazing blast throughout the cosmos.