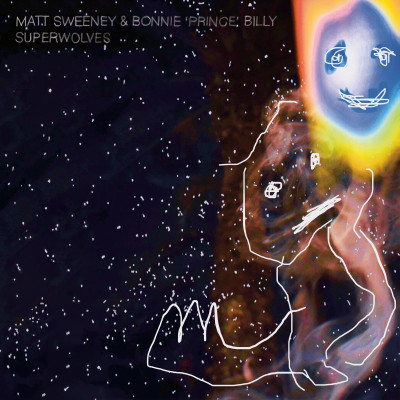 Calling Will Oldham, aka Bonnie ‘Prince’ Billy a musical chameleon would be certainly an understatement. Now, you can certainly add to the list Matt Sweeney, one of the artists he often collaborates with. Because, that is exactly what Superwolves, their latest collaborative album proves.

We get a whole gamut of the usual folk/psych mutations Oldham and Sweeney have gone for before (‘Good To My Girls’), but also some uncharted territory for them, namely introducing some incredible Tuareg blues sounds, courtesy of guitarist Mdou Moctar, Souleyman Ibrahim on drumset and Tuareg guitarist and producer Ahmoudou Madassane.

As was the case with their initial duo outing (Superwolf from 2005), we get some quite incredible sounds and Oldham lyrics to deal with again. This time around, the duo first work separately on the song skeletons, and after shuffling what each has done a few times, they would even do live performances before shaping the songs into their final form.

As Oldham puts it, “The chemistry comes from lives, lived separately, in which music is crucial sustenance. We listen with gratitude and awe, knowing that we belong in there. We construct our dream selves with the faith that these selves will have their chance at life. We know what we are capable of doing and just need each other’s support to bring the imagined languages to life.”

And then, all over again, we get some unsuspecting, quite incredible results (‘Hall of Death,’ ‘Shorty’s Ark,’ ‘I Am A Youth Inclined To Ramble’) that seemingly belong on two completely different albums but actually flow into each other as they were almost meant to be alongside each other.

Finally, as is always the case when Will Oldham (in any of his aliases) is involved we can expect the unexpected. And truly enjoy it.