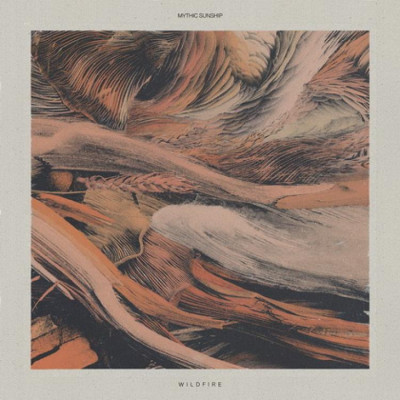 Copenhagen quintet Mythic Sunship have made quite a career out of the kind of music which aims to bend your mind through the use of free-form jazz, and over the course of five albums they have explored the outer limits of jazz inflected psych rock. With new album Wildfire, they continue that journey to the outer limits on an album which rarely shifts from the kind of music that they have created before.

Opening track, ‘Maelstrom’ is exactly that, and it’s noise, interlaced with the wildest saxophone you have ever heard shakes those proverbial cobwebs from your ears. Blasts of prognostic sound, piercing your very inward soul and shattering it into a millions shards play off motorik fuzzed out riffs. The free-form nature taking its cue from Miles Davis and pushing it through the thin membrane of reality into the otherworldly out there. As far as first tracks go, this is certainly a statement of intent from the band.

‘Olympia’ leads the charge with it’s incessant guitar melody latching on to your brain like some long lost Steve Hillage song, blurring the lines between prog and psych into a triumphant blast of glorious noise. Similar to the way Hillage leads his listeners to that point of epiphany, you find yourself at the peak of orgiastic delight as the band seek ever on for that point of pure high. It’s 11 minutes leave you exhausted and elated, much like the music sounds as it winds down. After that, ‘Landfall’ is much more straightforward. A blast of semi-normality after the preceding strangeness. A burst of explosive crescendo giving way to the riff. The sax is back, but this time playing a bit part to the rest of the music.

‘Redwood Grove’ is more soulful. Less intense or incessant as the former tracks, this one washes over you in a haze of blissful noise, with only flashes of the prior manic free-form excursions appearing. Here the guitar and sax become bedfellows, embracing each other rather than fighting. Interlocking as one, it builds slowly to a gorgeous crescendo, segueing dramatically into final track ‘Going Up’. Acting as a summation of the album, some of the more outre moments have disappeared to leave a standard psych closing track which does the job but leaves you yearning for those intense elements. Still, this is the trip right? You end on the chilled out cascade of noise, rather than being hurled left and right by the discordant noises. It all gets a bit anti-climactic which is a shame.

This intense free-form exercises do wear a little thin here, and at times Wildfire sounds like it is simply running out of ideas, or simply attempting to go as wild as possible. There is a raw element to the music though, and that improvisational tone mess you are never quite able to grasp on to anything for too long. That said, there are times when the music takes an express elevator to your mind and twists it into newfangled shapes. The skronk of the saxophone exploding against the dynamic riffs portray a keen sense of reaching out to those Miles Davis and Coltrane influences and bring something quite new to the table. For those intent of exploring music free of form or boundaries then Mythic Sunship are the band for you.