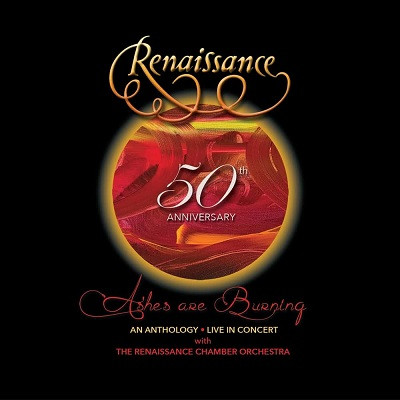 50th Anniversary Ashes Are Burning: An Anthology - Live in Concert by Renaissance

Recorded back on October 12, 2019 at the Keswick Theater in Glenside, Pennsylvania, this 2-CD/DVD/Blu-Ray box set consists of Renaissance’s breathtaking performance the venue with an orchestra that included songs that haven’t been performed in orchestral versions. But also marking the 50th anniversary of the band’s formation. So for us, it is time to be a part of their journey with us.

It started back with an IndieGoGo campaign to raise on August 20th that same year to bring the first concert film in HD format so that fans can watch the show again and again, the goal was to raise $56,915. It went up to $73,305 by 567 backers. And once you have the box set in your hands, you can just close your eyes and imagine yourself at the Keswick showing support for a band that have really kept the symphonic arrangements burning brighter than ever.

It is not only to celebrate the band’s formation, but with a special guest from The Yardbirds, original Renaissance founder and Illusion drummer Jim McCarty, who joins the band for two songs. He has come full circle to know that it has been an amazing journey to know that the spirits of Michael Dunford, Betty Thatcher, and the late great Keith Relf are watching over them.

This is a concert that is not just a performance to honor the band’s anniversary, but it is an exploration to listen and watch the event of a lifetime. This live concert is a trip down memory lane before everything came to a screeching halt in March of 2020. From the moment ‘Island’ is performed, Tesar plays this concerto piano introduction as Lambert’s ovation acoustic guitar fills up the venue with Jim McCarty’s drum work.

For Annie, taking up the mantel where Jane Relf had left off when she originally sang it on the band’s sole self-titled debut in 1969, she sings it beautifully. Once Renaissance goes into this Beethoven-esque arrangement with a mid-fast tempo between the band and the orchestra, they reach into this climatic heaven before the wind instruments and Traversa’s bass line become a race down the finish line to thunderous applause.

With ‘Day of the Dreamer’ you have Frank Pagano’s militant drum work with some intensive time signatures, followed by trumpet fanfares as Haslam’s vocals lends the audience a strong vision to embark on a new beginning for us. With its lullaby midsection, the whole team takes us through the clouds to unknown worlds to an incredible improvisation that is nothing than we ever heard before. They also performed two tracks from their 2013 studio release, Grandine il Vento. One of them is a killing performance of ‘Symphony of Light’. Which becomes this futuristic operatic suite at the Keswick that takes us into the 25th century.

The first two minutes sees Renaissance channel both the Wish You Were Here-era of Pink Floyd and Pete Sinfield’s Still album. As the bell tolls featuring some ‘80s Roland synths and bass guitars taking the audience into the mountains of peace, it transforms into this film score done in a spaghetti western by honoring Ennio Morricone as the rhythm section returns to the future once more and Annie becomes this messenger on what is to come for the 30th century with high-ranging vocals.

The last three minutes gets even darker by channeling the pink scrolling golden years of the Charisma label honoring early Genesis and the dooming nightmares from the Pawn Hearts-era of Van Der Graaf Generator by reaching the sunlight to revision some light at the end of the tunnel.

‘Mystic and the Muse’ starts off with a Stravinsky-esque intro for Haslam channeling through the dangerous thunderstorms before the band channel the rocking styles of Rush’s two albums; Fly By Night and 2112. Before the string section takes us into the deep, dark areas that Annie describes in one of the lost stories from the Arabian Nights saga. Not only that, the band channels through the inner beauty of ‘Ocean Gypsy’, the symphonic Crimson-esque take of the ‘Midas Man’, the sing-along fanfare opener to the ‘Carpet of the Sun’ and spiraling lift into the sun for an operatic arrangement on ‘A Song for all Seasons’. It’s the fan favorite closing track ‘Ashes are Burning’ that gives Jim McCarty a chance to come back for the final number.

For me, Renaissance aren’t just a band, but more like a family that have finally been brought together between them, the orchestra, and the audience for being a part of this fabulous voyage to bring the circle in full. And who knows what will happen next in the years to come, but the story of the band’s history is now completely recorded live at the Keswick.