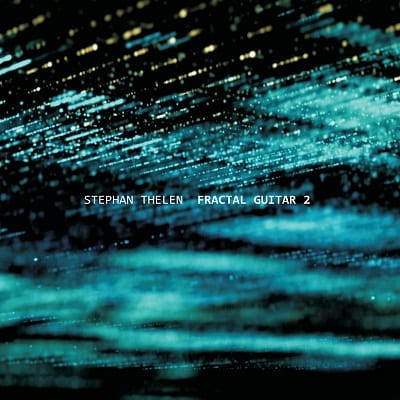 It’s been two years since Sonar guitarist, composer Stephan Thelen has released a follow-up with the Fractal Guitar release. Last year he had done music for the RareNoise label with the Kronos Quartet and the All-Women ensemble, the Al Pari Quartet entitled, World Dialogue, and the continuation of the second volume of Transportation with Sonar. This year he’s back in the saddle again with Fractal Guitar 2 released on the MoonJune label. Recorded at various locations between Europe and North America in November 2019 and July 2020, Fractal Guitar 2 shows Thelen a sign of bringing some hope and strong freewill to those who are going through another rocky road since everything came to a screeching halt in March of last year.

But for Thelen, he shows no sign of stopping. In an interview in 2014 for Anil Prasad’s website Innerviews: Music Without Borders at the time Sonar released their second release Static Motion, he was asked along with Bernhard Wagner on how pattern-based music affects the perceptions of listeners.

Thelen’s response to that was this; “Pattern-based music gives the listener a much more active and liberating role in the ritual of performing music. It’s not about being passively entertained, about personal feelings, or about admiring musicians with great technical abilities. It’s about players and listeners being together in the same space at the same moment in time, standing in awe of the seemingly infinite power of music and working together to gradually create something remarkable.”

And with Fractal Guitar 2, it is not only a pattern-based sound, but a journey into the unknown. When you listen to ‘Celestial Navigation’ it becomes this underwater darker passage score to Andrei Tarkovsky’s 1979 unsung sci-fi classic, Stalker. You feel that you’re on this adventure into the Zone, which is an area for the laws of physics. And it’s a dangerous place to avoid and hidden from its secrecy.

The opener ‘Cosmic Krautrock’ takes you into the heart of the jungle with a steamy hot atmosphere. Featuring some intensive loops done by both David Torn and Bill Walker, choppy organ with morse code effects, it is a cross between Bowie’s Outside-era and the psychedelia midsection of Ash Ra Tempel’s Manuel Gottsching. The train ride continues once more to a stop as they come to this place that has now become a ghost town before returning back home with some intense guitar-like grooves at the end.

‘Mercury Transit’ echoes both Tool’s Undertow and Pink Floyd’s Atom Heart Mother-era. Swirling echoing wah-wah effects by going to this spiraling staircase that go up-and-down with Barry Cleveland’s bowed guitar by turning into a nightmarish scenario, it’s the back-and-forth arrangement to see what will happen next before it cries out into this brutal howling arrangement that is batshit crazy with some minimal organ exercises!

‘Ladder to the Stars’ sees Kaiser, Muir, Reuter, Durant, and Pasquinelli releasing all of the flaming fires they have inside their body to go beyond our solar system. Adventuring through space and time, Stephan returns to Sonar’s answer to the millennium falcon by giving his bandmates enough oxygen, making sure he hasn’t forgotten them. I love how it transforms into this Camel-sque sequence that is honoring the Moonmadness album. Imagine if you will Robert Fripp, Andy Latimer, Edgar Froese, and Peter Bardens creating this continuation for ‘Air Born’ with some hyper-driving formulas that makes the jump to light speed.

Closing track ‘Point of Inflection’ gives David Torn a chance to return for his looping arrangements. Returning back to the Bowie-esque vibes from the Outside-era, the cracks are finally about to be opened. You can imagine he and Stephan are finally carrying the badge that Detective Nathan Adler had left for them before he went back home to his planet making sure they got the job right. The insane twists and turns moves into this neo-noir scenery that Adler’s spirit is pleased. And he’s finally at peace understanding that justice is served the right way. For him, watching both Stephan and David knowing that he’s very proud of them to get the case closed.

Fractal Guitar 2 is one of the most challenging releases from the MoonJune label. Stephan is like a snarling beast ready to be released from his cage to raise hell again once more. Let’s hope one day he finishes up another trilogy of the Fractal Guitar series. Hopefully to bring everything full circle. But who knows what he will think of next. He is still the mad scientist of arranging and composition. Whenever he cooks up some strange experiments that he’s bubbling inside his laboratory, we will see what Stephan will have in store in the years to come as a solo artist and with Sonar.