(((O))) Review: An Autumn For Crippled Children – As The Morning Dawns We Close Our Eyes 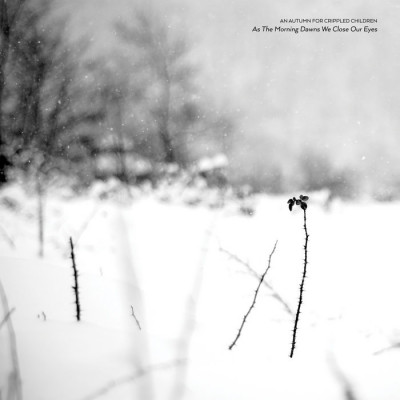 Now onto album number nine (plus the obligatory singles compilation), Friesland’s An Autumn For Crippled Children are nothing if not prolific, especially considering that they have only been putting out releases since 2010. Since their inception, their genre of choice blackgaze has grown, exploded and receded back into the underground, with many of its progenitors having evolved past the label if not outright disowned it; yet the Dutch trio have always seemed like defenders of the faith, never quite abandoning its tropes nor becoming stale. They plough the same fields and sow the same seeds with each passing season, but the taste changes slightly with each release – sometimes sweeter or brighter, occasionally more unforgiving and packing a harsher bite – and it’s for this reason that each new album is still met with eager expectation by many.

Opener and lead single ‘Carefully Breathing’ sets the ball rolling in style, led in by a bright post-punk influenced riff that immediately lifts the spirits before MXM’s howls and screeches join in the fray. The contrast between the two, between hope and hate, light and shade, is An Autumn For Crippled Children’s trump card and they have gotten even better at utilising it to the extent where here it’s almost slick, an effortless clash that feels so natural it’s as if they invented it. Alongside the post-rock, post-punk and black metal influences, there are shades of dream pop in the light electronic flourishes they squeeze in here and there, as well as in the canniness of their songwriting. Every song clocks in between 3.5 and 4.5 minutes and between this, the strength of the hooks and the crystal clarity of the production, it almost feels a little too polished.

That said, there’s a feeling that this is precisely the point. As The Morning Dawns… subverts expectations of what a ‘genre’ album should be, either by pairing resolutely melancholy themes and pained screams with upbeat, surging riffs that eliminate even the possibility of a good mope, or in pushing their sound so stridently forward while still throwing in moments of pure chaos. ‘Of Your Light’ recalls what is either the best or worst of An Autumn For Crippled Children depending on your point of view, building layer after layer of contrasting sound and giving each equal weight until it no longer sounds like a single song. Instead, it’s like the caffeine-fuelled sensation of having a dozen thoughts bouncing around your head simultaneously, except with blastbeats; contrastingly, ‘Melancholy’ feels clean and purposeful, CXC’s drumming flighty and expressive while the segueing from cold 2nd-wave bite to bouncy synth-addled shoegaze is handled with grace.

As The Morning Dawns… is, in a word, canny. It packs in a little of everything and aims to please every possible audience, but it does it all impossibly well. CXC has such versatility and precision as a drummer that they are always able to carry the mood of the moment with élan and flair, MXM has an ear for blink-and-you’ll-miss-them melodies that rank among the finest in the genre and even this far along in the game, they still inject the same passion and emotional punch as they did back when Lost was doing the rounds. Maybe they’re just preaching to the choir now, but it doesn’t feel like it – if they don’t pick up at least a few new fans on the strength of these songs, then there’s something very wrong with people these days.