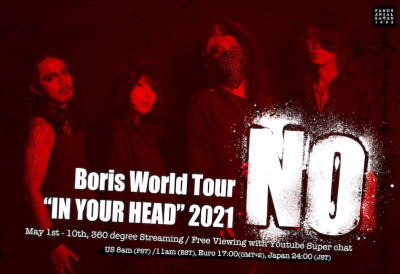 For a band who took their name from someone else’s song, there are few bands more synonymous with originality than Boris. While that desire to push boundaries hasn’t always been met with the warmest of receptions (many a punter remains bitter about Vein), it has resulted in some unexpected classics and fan favourites. One of those recent faves was NO, an album spawned by last year’s lockdown, and which perfectly captured the frustration and ire of all of us at that moment. It seemed almost a travesty that an album like that should go without a live showcase of its energy, but unfortunately a certain unnamed virus continues to be an arse – so what to do?

It seemed that a livestream was in order, but not just any livestream. A 360° experience that dropped you centre stage, giving the viewer free rein of what to watch at any point in the set. It’s an ambitious move but one that offers  greater viewer participation and, in an odd way, the closest thing to being at a gig, so it’s why I find myself at 10pm, smartphone in one hand, beer in the other, furiously headbanging along to Tokyo’s finest noisemakers.

With ‘Genesis’ it’s a subtle start, a smoke machine leaving the room in a murky haze that’s rendered psychedelic by the fine lighting setup. As Wata’s physical presence starts to appear out of the mist, so too does her guitar’s sonic one, laying down a thick blanket of fuzz as impenetrable as the fog hanging in the air. The build-up is gradual but resolutely heavy, and as the drums start to make themselves known, this is where the first major revelation hits – for tonight, Boris are a four piece. ム JAPAN (or, as he’s billed, Muchio) has taken over Atsuo’s drum stool and he quickly proves himself a more than competent replacement, mimicking his predecessor’s wild and sometimes theatrical style while adding some more technical flourishes as he blasts his way through the set.

Much of NO’s appeal stemmed from the fact that it was the product of frustration, a sudden violent outburst of aggression that no-one really asked for but no-one could deny was desperately needed; and what this set excels in is replicating that tense energy and giving it a face to match the voice. The normally coolly detached Wata takes a few opportunities to really let rip – her solo on ‘Anti-Gone’ focussed yet resolutely rock ’n’ roll while the distorted fury she and Takeshi muster on Zerkalo would put most sludge bands to shame. Likewise, Atsuo’s stint away from the drumstool is seized with glee, mugging at the camera and getting uncomfortably close to the (virtual) audience in every single cut, and howling out his frustrations for all the globe to hear. He even takes a leaf from kindred spirit Masami Akita’s book and flat-out buries the final minutes of ‘HxCxHxC -Perforation Line-‘ with wave after wave of screaming feedback and white noise, wielding a handheld noise box as if it were Thor’s hammer.

The sole departure from NO is probably the only song that could match up to its energy, the progressive d-beat assault of ‘Quicksilver’ not only functioning as a template for much of NO’s anarchic crust-punk but also bridging it with the off-kilter melodicism that runs through their best work. It’s one of Takashi’s shining moments, chaotic and catchy in the best of ways, and it’s a slice of respite before ‘Fundamental Error’ pummels the atmosphere into the ground. Of all the show’s moments, this is the most furious, the pinnacle of unrestrained punk fury; and even if the explosive excess of ‘Loveless’ is the actual closer for the set, it’s ‘Fundamental Error’ that really embraces the spirit of the show.

All in all, Boris’ World Tour In Your Head is both an intriguing experiment in musical appreciation and a novel alternative to usual live-streamed fare. When smartphones became a constant feature at concerts, much was made of how punters were now content to watch a show via their screen rather than actually taking part and witnessing it with their naked eyes; but in this case having phone in hand, being able to move and choose what you want to focus on, expecting that killer fill or vocal hook and turning to witness it – it felt oddly nostalgic. It provided a level of immersion that had been missing from many streamed events and though it probably won’t make artists more accepting of people filming entire bloody shows when concerts resume, this was the perfect chance to experience a performance from one of music’s great innovators in a truly unique way.