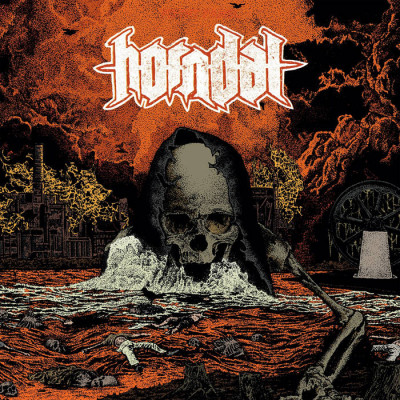 Let’s face it: metal is unlikely to change the world. I can’t think of many conflicts that have been curtailed because Black Sabbath’s ‘War Pigs’ had been played at innards-rattling volume. But having said that, it is always a treat to discover a band that has an agenda – one that is unafraid to go beyond the usual tropes of fire, mental torment, religion, fire, gore or fire.

Horndal is such a band, with an angry message to all those who have designs on messing up their environs – which they share their name with. Horndal is a small, unassuming village in Sweden near a lake. The surrounding area has been ravaged by centuries of copper mining and the town itself was left to rot after the digging became less profitable. It is a tale that anyone from a post-industrial wasteland will be familiar with. And the band told that story in their debut album – and you would think that would have been it as far as protests go. Horndal (the town) would have carried on, attempting to clean up the mess that the multinationals had made. Maybe they could restore it to its former modest beauty. And maybe the band would have found something else to get angry about.

But then Google descended on the area and bought up 109 hectares of land – after all, the mining-ravaged fields and forests would have been cheap. The idea was to build server farms, which require vast volumes of water to keep cool. And Google’s solution to garner enough water necessary to cool their hoard of data was to extract it from the nearby lake. Hence the name of this album, Lake Drinker, which is a furious, noisy rebuttal to Google and any other multinational who feels it can expand with impunity.

And apart from the important subject matter, the album is excellent. It is teeming with aggression, but intelligent at the same time. From the moment the opening riff announces itself on ‘Rossen’ (the name of the lake next to Horndal), the listener is treated to a raw, sludgy, mightily-pissed-off barrage of heavy, heavy music.

Guitarist/vocalist Henrik Levahn has a rich, raging bellow which suits the music and subject matter perfectly – and the whole package has that intangible “feel” which the most durable of metal albums have. On the first listen the crisp sound of the drums (played by Henrik’s brother Pontus) or the ragged guitar tone might grab you. On later spins, you might notice the quiet moments which stave off any danger of suffocation by noise. The lyrics are smart. And then there are the riffs. Oh, there are tons of riffs in here. At the risk of making a clumsy comparison, the album’s mood and sound reminded me of Horndal’s compatriots The Haunted and their excellent Revolver record.

A highlight of the album is ‘Kalhygget’, which means clear-felling in Swedish. Yep, Google is yet to decide on building anything in Horndal, but that didn’t stop it from razing the forest to the ground. The song is fast – like, Motörhead fast – for the most part, but then it breaks down into an atmospheric lengthy fade-out. The juxtaposition of groovy, heavy riffs and near-clean atmospheric sections is a theme that the band return to throughout.

Speaking of atmosphere, two of the most affecting songs are ‘Home’ and ‘Thor Bear’. The former contains a stark acoustic guitar over which Anders Eriksson, an environmental activist, speaks. Eriksson had his passport revoked for 10 years after confronting the then Prime Minister Torbjörn Fälldin during a demonstration. He speaks in Swedish on this album, but you can hear the urgency in his voice.

A recording of that demonstration bridges the end of ‘Homes’ and the beginning of ‘Thor Bear’ (the English translation of Torbjorn), which begins with a crushing riff, but also has a mid-section with a quite lovely horn section.

The whole album rips along in just over 45 minutes and there is not a dull moment on it. As the plaintive acoustic guitar fades out on ‘Ormön’, the final track, you wonder where the time went – and you are also left with the hope that this music and its message might change the world, even just a bit.