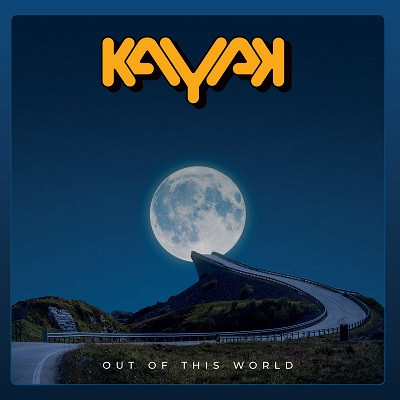 Out of this World by Kayak

2022 will be the 50th anniversary of the formation of Dutch progressive rock group, Kayak. Launched by Ton Scherpenzeel and the late Pim Koopman, they are sometimes one of the most overlooked bands to come out of the Netherlands. From classic albums such as; Royal Red Bouncer, See See The Sun, Starlight Dancer, Merlin, The Last Encore, and delving into doing film music that the group had done for Paul Verhoeven’s 1980 controversial classic about three young men who have a love for dirt-bike racing, Spetters (Splashes).

Despite line-up changes, the band is still going strong. And with the release of the 18th studio album from the InsideOut label, Out of this World, proves that the band still have that electrical spark inside their blood. Symphonic, arena rock, pop, and mind-blowing arrangements, it is like going back between the years 1975 and 1980 all over again.

While bands that came out of the Netherlands from the realms of Earth & Fire, Alquin, Focus, Golden Earring, Trace, Ekseption, and their answer to the Canterbury scene with Supersister, Kayak will hopefully get some recognition on the release of their new album this year. And the centerpieces on this album are quite interesting.

From the opening title-track you have this metallic overture-sque introduction as we picture ourselves into this battlefield before going into another universe of parallel doors with some epic operatic rock arrangements with the keyboards and guitars delving into this pastoral symphony. ‘Waiting’ sees Kayak transforming into the Private Eyes-era from Hall & Oates.

It is a mysterious composition featuring some reverbing guitar lines as it deals with searching for their loved ones who have been missing for many, many years and trying to bring them back alive in this film-noir-sque atmosphere. ‘Under a Scar’ is an action-packed adventure to reveal the dark side of this killer on the run, and the hell he has unleashed across the city while ‘Kaja’ gives Signor come center stage to go up to the mountains to carry inside his travel kit of Queen’s second album to play for the sun to come up.

‘Mystery’ is a return to both Phantom of the Light and Merlin. With its arena rock midsection featuring some crossovers between Boston, Klaatu, and Styx as the Oldfield-sque intro on ‘Critical Mass’ deals with survival of the fittest. Thundering riffs and soaring synthesizers, it’s a mid-sequel to where ‘The Sword in the Stone’ had left off.

‘The Way She Said Goodbye’ is a relationship gone horribly wrong. Heartfelt acoustic symphony textures with a beautiful flamenco-like midsection, it becomes this mini operatic scenario of this person alone in his house who is lonely and depressed on what went wrong and how he can become a better person again.

‘A Writer’s Tale’ returns once more to the metallic overture. This time with guitars and a string section on the subject of domestic abuse and sexual assault. While there is a moment where Kayak channels Fruupp, an Irish progressive rock group who had released four albums from 1973 to 1975, going into ‘It’s All Up Now’ from their third studio album The Prince of Heaven’s Eyes, the clock begins ticking for the drums to reveal the brutal figuration of the person’s damage he has done to his loved one. And once it comes out to the public, the biting of the hand that will feed you once and for all.

This was a big challenge for me. Whether you get it or you don’t, Kayak’s music is often under the radar in the prog community. But for Out of this World, it is not just a story-structured album brought to life, but an epic movie that we’ve been waiting for by getting away from the Marvel cinematic universe and into something special and mind-blowing.