(((O))) Review: Laura Meade – The Most Dangerous Woman in America 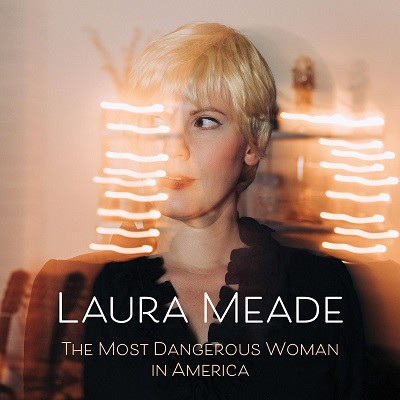 The Most Dangerous Woman in America by Laura Meade

In an interview with Johnny Sharp from the Louder website, Laura Meade wanted to go deeper beyond the progressive genre. “My music tends to skew less progressive, more like art rock. A little more of the melodies taking the front instead of big musical passages. And with the idea of the lyrics really being super important.” There’s no denying that Laura has made a name for herself since joining IZZ in 2002 and married founder John Galgano. She’s more than just a band member. Since releasing her 2018 solo debut Remedium, Laura has returned to center stage once more with her follow-up, The Most Dangerous Woman in America.

Released on the Doone label, Meade’s latest release is a conceptual story about a woman whose voice was silenced. Her story remains a mystery and had kept quiet in her own country. Listening to this album, almost reminded me of the tragic rise and fall of actress Jean Seberg, an icon of the French New Wave cinema starring in Jean-Luc Godard’s 1960 classic Breathless. As for Laura, she’s giving listeners a chance to be a part of her film that we’re envisioning in front of our own eyes in this electro-pop vibration with a ‘80s new wave atmosphere as she follows in the footsteps of Steven Wilson’s latest solo albums; To The Bone and The Future Bites.

The album begins with a flash-forward sequence that sort of resembles Serge Gainsbourg and France Gall’s 1966 single ‘Les Sucettes’ with ‘On the Shores of the Seine’ before it segues into ‘Leaving’. With this alarming piano section, followed by this Kind Of Blue-esque bass line while John’s guitar sounding like a helicopter soaring through the skies, it is a romantic, dramatic, and futuristic story as Coralian’s electro drum beats gets the temperature level rising.

‘Burned at the Stake’ is a sequel to Bjork’s ‘Hunter’. The character feels like she’s trapped in this nightmarish hell filled with delusional paranoia, knowing that the either the FBI or the CIA is watching her 24/7 with swirling keyboards before she relocates to another part of the city. ‘Iconoclast’ transforms into a waltz themed background. Laura’s main character is now trapped in the forest and being photographed like crazy. But then with a Leslie piano vibration, Meade brings some light towards the end of a tunnel as the Mellotron-esque midsection goes into a pop-orientated dance.

‘End of the Road in Hollywood’ is Laura’s answer to David Bowie’s title-track, ‘Aladdin Sane (1913-1938-197?)’. She takes us to the deep, dark areas of the glamour that the so-called movie producers and famous people have shown their darker side that the public doesn’t want to know of revealing the skeletons in their closet. Like a cousin to both Ultravox’s Vienna and Depeche Mode’s Violator by channeling the Krautrock genre, it’s a challenging composition tackling one of the most heavy subjects since what happened to the Harvey Weinstein story in 2017 who had all the success with Miramax, turned into a living nightmare of sexual assault and abuse that he hurt and bullied.

‘Doesn’t Change a Thing’ has this Avant-Pop orientated theme of Harry Nilsson for the first minute and 40 seconds before going into this ‘80s synth vibration while ‘Forgive Me’ turns into a middle-eastern trip-hop atmosphere by hitting the dance floor. Hypnotic evil-eye arrangements and complex melody and synth sequences between Laura’s vocals, it is a final message to give the next generation on not to become who she was.

The Most Dangerous Woman in America is probably going to be one of the most controversial albums released this year. But this is Laura’s crown jewel. She has showcased another storytelling structure that is something straight out of between the headlines of the film industry or something out of a black-and-white film from the late ‘40s, early ‘50s. And for Laura, she’s only just begun. And there’s no stop sign for her by blowing the whistle at the right moment, at the right time.