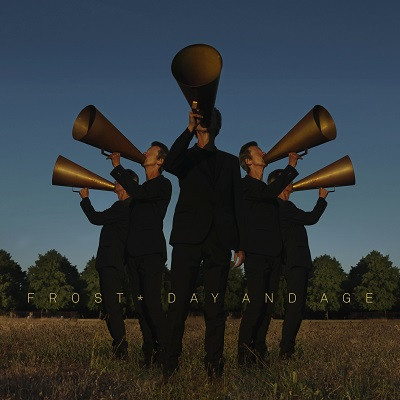 Day and Age by Frost

It’s been five years since Frost* have released a new album after unleashing their third studio album, Falling Satellites. Formed in 2004 by Jem Godfrey, Frost* were the opposite of the progressive rock genre by taking a leap forward to see what they will think of next. Now in 2021, after Craig Blundell has departed from the band in 2019, Frost* are now a trio. With the release of Day and Age, it is a staggering view of what we’re seeing in the near future.

Like something straight out of the 1998 film The Truman Show, Day and Age is a microscopic view on reality television at times. It is almost like seeing how we are being watched throughout a massive TV set. Corrupted from producers and captured by hidden cameras to get big massive ratings, Day and Age pushes those boundaries of having someone else’s private life being exposed on national TV.

The opening 11-minute title-track starts with a young man detailing on what is to come from the following program with some darker atmospheres. It takes us deep in the heart of the jungle with a mid-80s rocking vibration of the Top Gun period from Kenny Loggins. The hope to escape from this nightmarish world, becomes a starting point to getting out. And it becomes the hardest part throughout the story.

Intensive drum and bass patterns, it makes the glass shatter unexpectedly to finally break out of this hell-hole before it becomes this horror film vibration from the children’s choir sung through this chant in the styles of the original 1960 classic, Village of the Damned. ‘Terrestrial’ features chaotic noises, pounding drum sequences, and rising momentum that is frozen in time. With ‘Waiting for the Lie’ Jem plays this Moonlight Sonata-sque intro on the piano as he unleashes the Orwellian vision that has come to life throughout the city. And believe me, it isn’t pretty.

Mitchell’s snarling textures, takes us into the 22nd century while Jason Isaacs’ narration for ‘The Boy Who Stood Still’, sees a crossover between electronic pop and AOR vibes. There are elements between Air’s score to Sofia Coppola’s The Virgin Suicides meets the story structures of Supersister’s ‘Spiral Staircase’ with some complicated signatures and synth-waves filling the cavernous hallways as the drums pound some more with these Lifeson-sque guitar structures.

‘Kill The Orchestra’ begins with a nod to both ELO’s Face the Music-era meets Roger Waters’ The Pros and Cons of Hitch-Hiking-era in this melodic calm before the storm as John plays some Legend of Zelda vibes on his guitar to set up more of the danger to lean forwards the light at the end of the tunnel.

You can hear the Morse code signals on the price of becoming famous, has some darker tones for some of the characters that have known it is lonely at the top. As we head down the river for more of the electronic symphonic pop textures, John sends in some brutal segments to nail down uplifting parts to be free from what Truman Burbank had to go through the harsh thunderstorms.

Closing track ‘Repeat to Fade’ has operatic vocals before Mitchell screams on the mic “ENJOY YOURSELVES YOU SCUM!” You can tell that John is screaming at the top of his lungs after leaving the massive studio and finally seeing the sunlight, having his Shawshank Redemption momentum.

I can hear some of the THRAK-era vibes that Frost* channels before sending in the crashing effects of a Tidal wave and submarine echoing throughout the sea as the crystal ball is revealing what will happen next for our main character who worked his ass off to escape and be free from the nightmare throughout the inside.

Day and Age was quite a challenge for me. Tackling into the world of Jem Godfrey’s arrangements, this is their alternate score to Peter Weir’s The Truman Show. And to be allowed to have three drummers including Kaz Rodriguez (Chaka Khan), Darby Todd (The Darkness, Martin Barre), and King Crimson’s Pat Mastelotto, Frost*’s fourth studio album is one of their brutally honest releases during the pandemic that is a wake-up call of what has become.