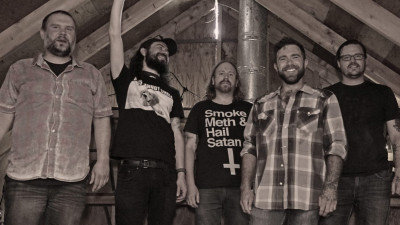 The release you get when playing hard. Very much an emotional and cathartic thing we’ve been missing.

Combining hellish grooves and a blistering energy, Blue Ox’s blending of punk, hardcore and metal is an intense listening experience. The band (who feature members of Dead To Fall, Devilinside and Ambassador Gun) have just released their new album Holy Vore and Gavin Brown caught up Blue Ox vocalist / bassist Luke Olson to hear all about it and its creations as well as the band’s hiatus and return, the influences on the sound of Blue Ox and their hopeful return to the road.

E&D: Your new album Holy Vore is out now. How did the creation and recording process of the album go?

Luke: I joined the band after most of the material was written. The creative challenge I posed to myself was how do I approach the bass with these songs? On previous records the bass parts very much kept in sync with guitars. I went with my intrinsic style of “triplet” picking and chasing Dan’s (Johnson: drums) d-beat battery. He’s perfect to play along with. The album was recorded at Signaturetone Recording in Minneapolis by owner and engineer, Adam Tucker. Blue Ox has always worked with him on the records. He’s like a 6th member. He pushes us for perfect takes without any stress and it always pays off. The comradery and creativity floods. I’ve recorded with Adam  a handful of times in other bands. This was my first time recording with Blue Ox and it was rad.

E&D: What subjects do the songs on Holy Vore deal with?

Luke: Dennis (Hanson: vocals) is the primary lyricist and he writes about personal experiences and themes around despair, regrets, and self-sabotage. He’s creative with analogies and sensory descriptions of what’s swirling within his head.

E&D: Holy Vore comes out ten years since your last album Stray Dogs On Pity Party Island. What was everyone doing at that time and why was there such a long gap between the albums?

Luke: Almost everyone in the band plays in other bands so that pares down exclusive focus for Blue Ox. Some of the usual things that happen in life as well like jobs, marriage, kids, homes, and proximity to each other make our band time less often.

E&D: Did it feel like starting again with such a long gap between albums?

Luke: Since I’m the “newer” member, I couldn’t say exactly how the rest of the guys feel about that but since I’ve been playing with them we never ceased rehearsing or playing shows over all those years. Everyone was just staying busy with other projects and such and it made getting fresh material written, recorded, and released into the wild a longer process.

E&D: How have Blue Ox changed as a band in that time?

Luke: Writing music has been more of inclusive with everyone contributing. I think we’ve grown more professional in terms of playing live too. We were definitely known for a long time as a party-hard live band. Like NOFX when they’re on a bender!

E&D: How exciting does it feel to be back making music as Blue Ox now?

Luke: We’re on the cusp of (hopefully) moving past this pandemic shit and elated to get back in our jam spot and start writing fresh songs. We’ve had Holy Vore in our hearts for many years now and in a way, I think we’re collectively excited for the next chapter of writing and releasing new music. Most definitely under 10 years time!

E&D: What has the reaction to the new album been like so far?

Luke: It’s been really great. The album is moving units like no other release. We’d been playing a few of the new songs live for a while and people would ask “Hey! What album was “X” song on?” Our answer would go something like “Well, we haven’t recorded it yet, so…”. That becomes a bummer. When Holy Vore songs started to finally drop, we’d get Facebook/Instagram messages and such saying “Yeah, I remember, this is the one!” Very cool to hear those things that people actually remembered it from a live set. We really concentrated on releasing this album like a label would do it. Slowly revealing artwork, hinting song snippets. General hype. Dave at Earsplit PR has been a huge help as well. He’s got the experience, connections and gets us visibility. I’ve personally worked with him for a long time with other bands and learned a lot on how to do it properly. It’s made this release successful and reviews have been positive. So far!

E&D: What have been the biggest differences between now and a decade ago in terms of music and the music industry?

Luke: I’d say internet and streaming services. Full albums as an experience are great but nowadays seems like EPs, singles and such are more prolific due maybe to the saturation and exposure to music from all over the world. A band like Tool can do the full album thing every 10 years much better than we can! Hard to say how we’ll approach releasing new music in the future.

E&D: How did Blue Ox start as a band?

Luke: Blue Ox was started in 2005 by our drummer, Dan (Johnson) on guitar. The band was originally called Bones Jackson and was more of a just-jamming-with-friends kind of band. After the breakup of Devilinside, he shifted focus and Blue Ox became his main project.

E&D: The members of the band were previously in bands such as Dead To Fall, Devilinside and Ambassador Gun. Did you want to bring the experience of being in those bands to Blue Ox?

Luke: Not necessarily. Some of those mentioned bands have been less democratic and more comprised of a professional approach in terms of who writes the music, how are parts structured, who’s releasing the next record, etc. I feel it’s been mainly our close friendships within Blue Ox that makes it special and long lasting. Anything goes musically. We’re all busy with life and getting together to just hang and jam is all we’re about.

E&D: Are there elements of your former bands in the music of Blue Ox at all?

Luke: I suppose it’s inherent to write songs that come naturally. Since I’ve been in the band it’s never been about making a certain sound or let’s write a song like such and such. But your instincts are what they are and everyone’s background has to fold into the band in some sense.

E&D: What are the biggest musical influences on the sound of the band?

Luke: We’re all over the spectrum as music fans. But I’d say hardcore punk bands like Cursed, Entombed, and Disfear and metal bands like Slayer, Pantera, Cannibal Corpse, maybe even heavy-hitters like Torche, come thru clearly as influences for our sound.

E&D: Do you plan on hitting the road as soon as it’s possible to do so?

Luke: Certainly depends on how this covid mess shakes out. I think doing months-long DIY touring is out of the question at this point. Being a Midwest band makes it tricky to do short tours too since cities east and west are a haul. We’ve been discussing doing the long weekend thing in the Midwest and possibly flying to either coast and do short tour runs that way. More to come!

E&D: What have you missed most about playing live?

Luke: Seeing friends and of course the release you get when playing hard. Very much an emotional and cathartic thing we’ve been missing. We have a big show planned in Minneapolis with some killer locals if all goes well coming in late summer.

E&D: What have been some of the most memorable gigs that Blue Ox have ever played?

Luke: Opening for the Dead To Fall reunion some years back in Chicago was fun and well received. I think the crowd had little knowledge who we were. Although Logan (Kelly: guitar) played for Dead To Fall on that tour. We got on stage and had a bit of the cold shoulder vibe from the crowd but we did our thing and people moshed!

E&D: What have been some of the highlights of your time in bands so far?

Luke: Touring was always a highlight for me. Opening for Pig Destroyer and Call Of the Void. Playing Maryland Deathfest. But that was my time playing in Ambassador Gun!