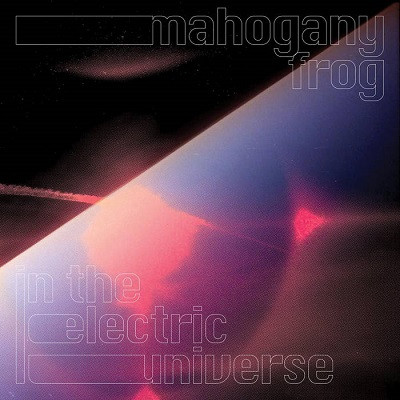 In The Electric Universe by Mahogany Frog

Canada has been home to some of the most important progressive rock bands. From Rush, Klaatu, Maniege, Max Webster, Harmonium, Blood Ceremony, Black Mountain, and Morse Code. But there is one band to be added to that list. That of course is Mahogany Frog. Since their formation in 1998 in Winnipeg, Manitoba, the quartet have taken their approach of noise, psychedelia, and kraut rock to a whole new level.

It’s been eight years after the release of their 2012 sixth studio album Senna. And now in 2021 they’ve come back with their seventh studio release from the MoonJune label entitled In the Electric Universe. Six years in the making, their new album has broken all the rules. And it is a holy shit in a fucking hand-bag eruption that they’ve unleashed! From the moment you put this album on, don’t expect a fancy-schmancy epic rocker.

Opener ‘Theme from P.D.’ starts with these alarming synths that fade in with middle-eastern Morse Code sections, followed by electro-drum vibrations. Sailing into the Bermuda triangle, vibrated ‘60s guitar textures and blaring basses go into Black Mountain’s In The Future-era. But there’s also the ‘Sysyphus’ suite from Richard Wright on Pink Floyd’s Ummagumma from the first six minutes on the composition.

The drum rolls set up the highway sequences that Andy Rudolph would do, giving the keyboards to go into a blistering hay-wiring effect. Headbanging bass and dueling guitars between Scott A. Raizenne Ellenberger, Graham Epp and Jesse Warkentin, the last three minutes arrive at a celebration inside the Pleasure Dome from Kubla Khan by having this climatic celebration before the break of dawn.

‘CUbe 1’ sees their keyboards sounding like a chainsaw buzzing completely out of nowhere that goes completely bat-shit crazy! Booming groovy electro-waves and crazy vibes that puts you on the edge of your seat, ‘((Sundog))’ is a noir-jazz pulp novelization setting up not just the famous cowbells, but a nod to the German group, Novalis. Featuring the ‘Dronsz’ vibrations, Mahogany Frog takes the listener into the heart of the jungle at 120 degrees that has a droning atmosphere with some string bass. And then the levels goes off the charts for the last seven minutes as the quartet channel both the Pawn Hearts and Meddle-era between Van der Graaf Generator and Pink Floyd with a spaced-out ending.

‘Psychic Police Force’ has a more full scale assault from the dooming guitars that gets your surfing gear going to head out to the beach! Battling organ exercises with a stop-and-go section, it becomes a full-scale riot ending that transforms into hell on earth. If I hear mellotrons on ‘Floral Flotilla (Sail to Me My Love in You…)’, then it is a free-for-all! When you hit the dance floor on this bad boy, you are embarking on a spiritual journey for a split second before the psychotic noise hits the drums and keyboards once more

The finale ‘Octavio (Including: The Ancension of the Moonrise Children)’, which sounds like a title that either King Crimson or Blood Ceremony could’ve used for one of their albums, begins with a Tangerine Dream-esque intro from the Atem period by having breakfast to watch the sun come up. And then it transforms into a pop-orientated groove between synthesizers and drums by adding this Supertramp-esque arrangement with howling Gilmour like guitars as the climatic finale takes the journey home back to earth as if the French duo Air are taking command of the starship enterprise.

In the Electric Universe is not for the faint of heart. Mahogany Frog’s latest release may divide a line in the sand. Either you get it or you don’t, this was one hell of a ride for me to embark on. Whenever MoonJune Records releases a challenging album, I’m always ready for that roller-coaster ride to happen. And this right here, is a welcoming return for our fellow Canadian troops to raise the roof up even more!