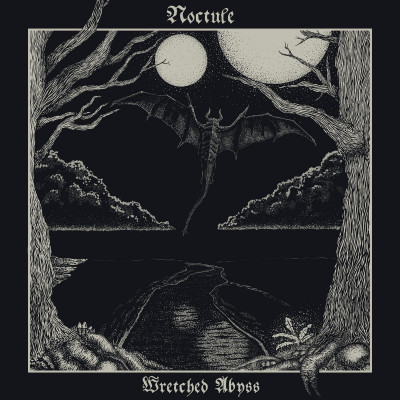 There are so many reasons that Skyrim will forever hold a place in gamers’ hearts. Maybe it’s the sweeping grandeur of its setting, or the intrigue of the Dark Brotherhood and the Thieves Guild; perhaps it’s just the simple pleasure of ‘fus-ra-doh’ing hapless bandits off of cliffs because they looked at you funny – no matter how you look at it it’s epic and, by extension, seriously metal. Noctule (a.k.a. Svalbard vocalist/guitarist, journalist and rollercoaster enthusiast Serena Cherry) takes its inspiration from Tamriel’s icy northern reaches and the cold allure of black metal, and in its marriage of these two worlds, a little bit of greatness is born.

To Cherry’s eternal credit, Noctule is an astonishingly ambitious project as while there are certainly elements borrowed from her Norwegian forefathers, most prominently Burzum and Immortal, there are frequent nods to the more progressive and emotionally balanced metal of Agalloch and early Opeth. More pertinently, Svalbard’s surging aggression crops up frequently throughout Wretched Abyss’ 41-minute runtime, and its very essence is baked into most of these 8 tracks. There’s a concerted effort to strike balance here, not only between the old and the new, but more noticeably between the need for up-tempo heaviness, all fire and steel and fist-raised triumphalism, and the desire to tell a story with all the nuance, beauty and sorrow that comes with that. It’s doubly impressive that this is achieved not just through strong songwriting but via Cherry’s guitarwork as well, showing as much skill with a 150 bpm tremolo blitzkrieg as with a sorrowful instrumental ballad.

Given that this is strictly a one-woman show, there’s a definite need to highlight the drumming on this record. Yes, it is programmed but that’s what actually sells it. There’s no clinicism here, just rollicking blastbeats and savage fills that are (almost) as well-crafted as the riffs themselves. On opener ‘Elven Sword’, the drumming fits neatly with the lean, streamlined aggression of the riffing but ‘Deathbell Harvest’ allows for more reflection, its tight and expressive beats perfectly in synch with the song’s various twists and turns. Vocally, there isn’t as much variance, with Cherry typically leaning towards a harsh, frosty croak that nonetheless fits the bill yet when softer moments do enter the fray, the contrast is striking and amplifies the dreaminess of the melodies tenfold.

On paper, there’s a lot that could have gone wrong with Wretched Abyss. There are no shortage of epic, melodically-gifted black metal bands out there, and adapting such a well-known IP comes with its own challenges, but Noctule navigates the clichés and pitfalls confidently. In ‘Evenaar’, she has crafted a soulful and groovy jam that sounds like nothing else and could likely have sold this album on the strength of a single hook and a well-timed harmony, ‘Become Ethereal’ is a lush slice of orchestral grandeur that would sit well alongside Jeremy Soule’s original score and the whole package is executed with a level of passion and skill that’s near-impossible to fault. As a love letter to classic black metal, to canny songwriting and to The Elder Scrolls’ rich lore, this is a winner in every respect.