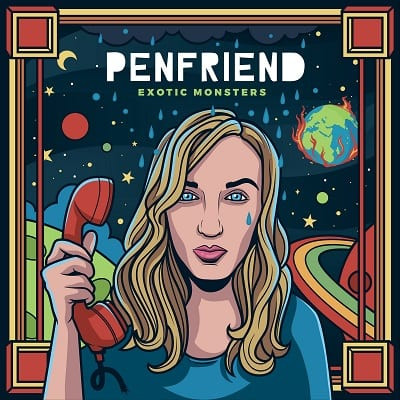 A debut that becomes a journey of finding your inner self with deep reflections by finding that light at the end of the tunnel. Penfriend’s Exotic Monsters is an adventure to find peace with yourself and moving forwards. Two years in the making, Laura Kidd’s project was recorded at her attic home studio, The Launchpad. To tackle the Brexit nightmare, social media, family, friends, and former lovers, Exotic Monsters is a movie inside your head.

And to be allowed to have Catherine Anne Davies of The Anchoress on piano and drummer Max Saidi playing on Laura’s full-length studio debut, they lend not just a helping hand, but knowing they got her back, no matter what happens. Not to mention Alex Tilbrook’s artwork for the album. He tips his hat to the graphic novelist Daniel Clowes (Ghost World, Eightball).

The artwork tells the story of this woman’s struggle and courage to carry on despite the dysfunctional world that she’s living in. The only escape from the outside world that has gone bonkers, is to be at home. And the seven highlights on Exotic Monsters, proves that she knows how much she’s going to be around for a long, long time.

‘Cancel Your Hopes’ features this late ‘60s Farfisa Organ going wild. With some post-punk rhythmic vibes from the guitars and bass, it is like something straight out of Nathanael West’s 1939 novel, The Day of the Locust as Tod Hackett sees his vision of the Burning of Los Angeles, come to life in a full scale riot. The song is a ticking time bomb ready to explode with some tidal waving crescendos on the drums that Max adds onto the piece by bringing more fuel to the fire.

‘Long Shadows’ is sort of the aftermath of the bloody riot and to move forwards with your life. Rising out of the ashes to finally see a small glimpse of the sun coming out of the dark, grey sky, the dooming guitars and synths are something straight out of Cluster’s Zuckerzeit-era.

The opening title-track tackles with how Hollywood has become the center of creeps and monsters to be a part of the casting couch and the lies they will tell you to be a part of their movie. Laura is not only channeling Jane Weaver’s arrangements, but the drum machines and heavy trip-hop vibrations tackle what is to come in the future and the themes of fame. Once you become famous, it can come with a heavy price. You become the massive media’s approach for ridicule of social media, trolls, and paparazzi sites like TMZ having a field day in showing how much of a damn fool you’ve become in front of your admirers.

‘Seventeen’ is Laura’s approach on a waltz themed song. Tackling the wonderful times on your rebellious teen angst against your parent’s wishes to be smarter. ‘I Used To Know Everything’ has some Soft Cell vibes. From the moment we meet one of the main characters in Laura’s story, we know that she is doomed from the start. You have these guitars going into a punching rhythm before going from one corner to another. They thought they had it all, but it comes back to haunt them with flashbacks of what happened to them after being rejected. And it is not a lot of fun.

‘Black Car’ is Laura channeling Peter Hammill’s lyrical structures of ‘A Louse is Not a Home’ off of his 1974 release, The Silent Corner and the Empty Stage. Driving away from the dystopian city which is now in ruins, she is screaming out to the gods while driving in her car towards a new chapter in her life.

‘Hell Together’ has this post-rock Violent Femmes approach honoring ‘Color Me Once’ Carousel synth structures with a brutal rhythmic effect, the lies that the abusers try to paint this pretty little picture of claiming their innocence, doesn’t fly with them. And the views of the Hell that they’re in would bite them in the ass in a big giant fucking way.

Penfriend’s Exotic Monsters is a mesmerizing release that I had delved into right from moment I put this album on. It is not just a fantastic debut from Laura Kidd, but also a therapeutic voyage Laura has brought to the kitchen table. She did it all to bring Exotic Monsters to Life. Not only that, but her album was featured in Tim Burgess’ Twitter Listening Party on May 25th of this year. So is this going to be the album of the year so far? We may never know.