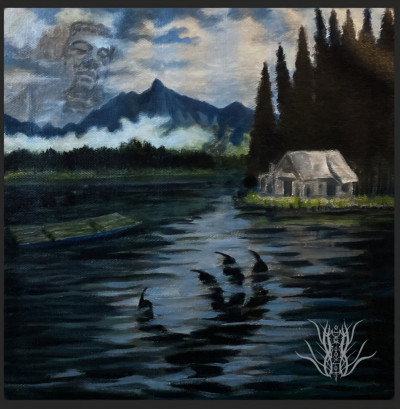 China’s black metal scene has long been a well-regarded secret, producing some fantastic and truly one-of-a-kind entities that a lack of distribution has forced to fly under the radar. Some managed to gain a degree of recognition, like Jinan’s atmospheric outfit Zuriaake, but one has to hope for even bigger things at times. One artist deserving of such fame is 景湖白 (Jing Hubai, roughly translated as ‘Scenery of Pale Lake’), a Guangdong-based one-man DSBM project that doesn’t seek to emulate western tropes but rather forges its own path, throwing cinematic ambience, the organised chaos of jazz, melancholia and cold, burning fury into the mix and leaving the listener to make of it what they will.

Calling this album, or perhaps even the project as a whole, ambitious feels like an understatement. Each of its six weighty tracks is an odyssey in miniature, with its own identity, story and voice. They are bound together through theme, sure enough, with a streak of environmental awareness that feels familiar enough to anyone who enjoys a bit of atmosphere in their black metal, but also in the meticulous approach to their construction. 羅景 (Luo Jing), the project’s sole composer and musician, employs a breadth of instrumentation and seems acutely aware of his limitations in each, able to culture complexity and simplistic beauty to magnificent ends. His guitar work is intricate, which works wonders when positioned against the howling, manic fury that he sometimes throws himself into, but conversely his piano and string accompaniments focus on delicate melodies and swooping, elegiac passes that evoke images of mist-streaked mountain passes and forgotten homes, half-buried in the mire.

The same duality also applies to Jing Hubai’s composition, where cacophonic swirls of tortured howls and crashing cymbals often find themselves jarringly laid over dreamlike, hazy swathes of ambiance. The resulting miasma has a near-delusional sense of unreality, tilting and swirling, settling into an abrupt calm before sending you down the helter-skelter again. It’s clever, but it’s also an intensely emotional listening experience, the sincerity of the agony and beauty being splattered across these vast sonic canvasses always uncomfortably evident. The effect can sometimes be overwhelming, with so much seeming contrast being fired at the speakers simultaneously that they all merge into a blur of fractured emotions, but within a genre where there is often a lack of original thought, someone displaying too much at a given time feels like an acceptable fault.

Whether more will ever be released by this lone, musically baffling figure is unknown. By the time of the album’s release in China last year, some of these songs were already seven years old, and there doesn’t seem to be much information on what else, if anything, Luo Jing is involved in but even as a stand-alone curio, this is a remarkable and surreal work that’s a cut above most modern black and post-black metal. Whether that’s because it’s free of the clichés and rehashed sentimentality that we’re now drowning in, or if it’s simply down to Luo Jing’s singular vision and his willingness to embrace eastern and western phrasing and structure, isn’t clear but at the very least, you won’t be hearing anything else like it any time soon.