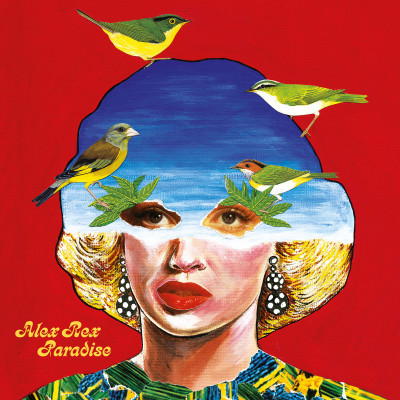 Now on his fourth solo,release, Paradise finds Alex Rex in somewhat of an upbeat mood, at least compared to his previous two releases which focused deeply on loss and death. Here, whilst there is still a fair share of morbidity, Alex tempers that with more than a hint of brevity. That said, nothing is ever quite as it seems, and amongst the countrified slide, and barbed lyrics lies an impregnable album that could be about self, relationships, witches, or anything else you want to throw at it.

Without throwing the words “concept album” at it, and just because the tracks segue into each other, and familiar motifs reappear, there is no indication of any concept other than Alex examining the nuances and foibles of life once again. It’s a journey which is akin to a good book, or a play at times though, with the welcome return of Lavinia Blackwell providing the Greek tragedy choral backing. Of course, musically it’s as far removed from the Greek myths as it can be, with the familiar country guitar, and ominous acid folk once again providing the backdrop to the lyrics.

The gospel tinge of ‘Lowlife’ provides a lyrical introduction as the music plays softly in the background, only raising its head as the harmonies rise. This sets the scene at least until the histrionic guitar of ‘Scandalise The Birds’ explodes in 70’s soft rock stylings. ‘Dancing Flame’ is more in tune with his previous band Trembling Bells as its Grand Guignol merges into disturbing acid folk. It’s a sound revisited later on the Hammer Horror death march of ‘Funeral Bouquet’, which manages to be both miserable and end with a sardonic chorus of “la la la’s”. It’s all perfectly in tune with the worldview of Mr Rex and long time fans will find much to adore here.

The sharp burst into ‘Ida’ is almost revelatory as we climb out of the doldrums into a real glam slam but the real epiphany arrives as the song ends in a rousing chorus only to be thrust into a world of knicker wearing on football pitches. Dramatically accompanied by Kacy Lee Anderson, ‘Black Peonies’ is a real highlight of the album and you find yourself wishing for more interaction between the pair. It’s the final run now though and after an oblique ‘Silver Apples of the Moon’, it’s the celebratory ‘Man Is A Villain’ which leaves us all singing along. ‘Every Wall Is A Wailing Wall’ may be the true denouement but it all starts on this rabble rousing finale.

Paradise is another fine gem in the career of Alex Rex and may be is most fulfilling solo release yet. It’s a difficult level to gauge. against though as the standard has always been nothing less than peak. It’s more accessible in parts, although lyrically it’s probably his most confounding, making this an album that you will chew over for quite a while. The music world is so much richer for having Alex Rex in it.