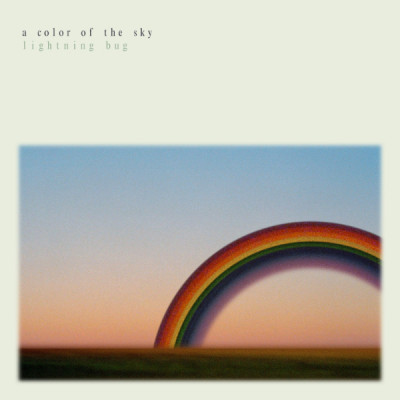 A Color of the Sky by Lightning Bug

NYC band Lightning Bug recently released their third album, A Color of the Sky. This ensemble is a project of Audrey Kang, Kevin Copeland, Logan Miley, Dane Hagen and Vincent Puleo. It is their first record on the Fat Possum label, their first time recording as a live band, and the first time that Kang, Copeland, and Miley are joined by Hagen and Puleo as full-time band members.

The album was recorded in a dilapidated makeshift studio in the Catskills. In August of 2019, singer/songwriter Audrey Kang traveled in the Pacific Northwest, camping and wandering on her own while immersing herself in nature. She says, “I get a lot of inspiration from nature. If I look at the sky and do a lot of nothing in nature alone—I don’t know. The songs just come.” This trip came after various endings in her life (work, love, relationships) that were an upheaval. Yet, her solitary meanderings gave her peace and contentment and formed the framework for this suite of songs.

The group’s Bandcamp page bills themselves as shoegaze in one of their labels. I could not disagree more. This ethereal music is a seamless mélange of dream pop, folk rock, and orchestral pop. I associate shoegaze with loud, noisy guitars and a plethora of effects pedals. But of course, labels are just that and are open to interpretation. You the listener may hear many different musical shades in this excellent album.

So let’s get to the songs. I am not going to overanalyze lyrics, as those are clearly heard and any listener can pick things up and interpret things in their own fashion. Opening track ‘The Return’ clocks in at nearly seven minutes, a curious decision for an opening track. It is a lovely slice of orchestral pop topped off by Kang’s enchanting vocals. She reminds me in spots of Anna-Lynne Williams. This song leads into the band’s first single, ‘The Right Thing is Hard To Do’. Kang examines her vulnerability and self-worth in an intimate musical setting. Hints of country influence waft through this flawlessly played set piece, a high point for sure on this collection.

‘September Song, pt. Ii’ is another favorite of mine, starting off like a cross between Fairport Convention and Trespassers William. I also love the slightly warped sonics, adding a bit of psych pop to the mix. Just beautiful! ‘Wings of Desire’ flies aloft like a sky full of colorful kites (Kang attended a kite festival during her sojourn in Washington), and you can imagine yourself in a green field with blue skies and cheerful sunlight. Perhaps you are sitting by a gently moving stream or river and watching nature all around you. This is a miniature summer day in a song, unfolding and embracing your senses.

‘The Chase’ is an instrumental that strongly reminds me of Spirit of Eden era Talk Talk, and that sound works well for this group (more, I say!). ‘Song of the Bell’ has a rain-washed musical tapestry, starting out of the gate with shimmering, spacey instrumentation that gradually morphs into some sterling dreamy psych. Wonderful! ‘Reprise’ is short and pretty and seems to be a different rendering of ‘September Song’. The album’s title track is like watching the sun rise, gradually lighting the earth with warmth, with flowers unfurling for the day and pollinators on the wing once again. ‘The Flash’ might be referring to the green flash sometimes spotted at sunset, or it might be something else altogether.

What I love about this album besides its expansive musical palette is how the songs remind me of wide open spaces yet have intricate and intimate treatments. In a year of turmoil, anguish, and sorrow, we need records like this to remind us what is important in life. A truly stunning dreamscape that is highly recommended by this writer.