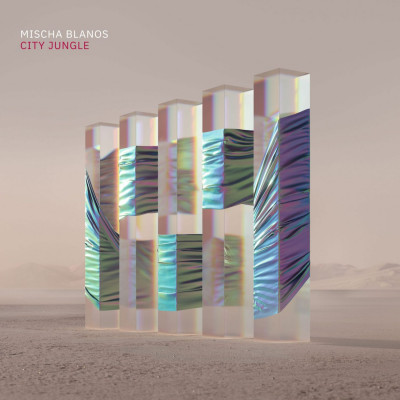 Combining piano as the main instrument in your music with electronics has been around for a while. In many cases artists going down that route go for a more ambient sound, combining their piano capabilities with electronic elements in an attempt to create a certain ambient soundscape. Not that many though go down a more rhythmic route, either with their piano sound or using electronics as a beat element. If they do so, they often separate the two, the combination not being that prominent. There, in both instances, the first name that would come up to those inclined for such sounds would be German composer Nils Frahm.

Well, now we can add a fresh name to that, possibly not a long list. It is Romanian pianist Mischa Blanos, who after two initial EP’s comes up with his debut album, City Jungle.

Blanos obviously had a very specific idea when he came up with the title of his album. He seems to perceive cities as bustling places, with a source of never-stopping cycles of percolating, rhythmic sounds with very few gaps of calm. The compositions here are all rhythmic templates, whether it is just the piano or whether Blanos adds rhythmic electronics in a more or less pronounced form.

From the opening ‘Silicon Road,’ on it becomes obvious that Blanos has the playing capabilities to pull such a concept through, both with his dexterity at his main instrument, and through the knowledge of different musical scales, like the Japanese Hirajōshi scale which he applies to the opener.

Even when he seemingly calms things down, like on ‘Fluorescence,’ there is always a rhythmic pattern present in Blanos’ playing that goes on to prove that well-known saying ‘a big city never sleeps.’