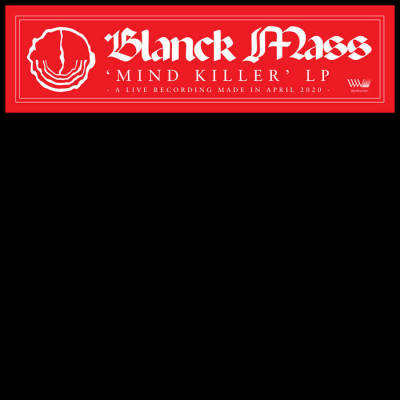 Blanck Mass has been an exemplary force in electronic music over the past decade and goes from strength to strength with albums like Dumb Flesh, World Eater and Animated Violence Mild being phenomenal audio experiences. This year has been a productive and prolific one too, and following on from this year’s long awaited fifth full length album In Ferneaux, Blanck Mass has released Mind Killer and with the release of both this and In Ferneaux, it’s been a hell of a year for Blanck Mass already.

Recorded as lockdown took hold, Mind Killer is an improvised piece of techno that sees Blanck Mass running wild with his music and has been released physically on vinyl as an extremely limited edition although, thankfully, is also available on Bandcamp. With only two twenty minute plus tracks (titled Side A and Side B of the vinyl) that, of course,  act as one piece of music, this is a journey into the creativity and soul of Blanck Mass and is another example of just how good he is and how rightly revered in electronic music and beyond he has become.

A swathe of noise grows and grows, creating the right amount of tension before a series of beats takes control and the piece is elevated into a series of beautiful and joyous techno soundscapes, with that Blanck Mass vibe very much at the fore throughout. Mind Killer is him letting his imagination run riot and in doing so, creating something very vital, a joyous celebration of music that builds and builds. Alongside those beats, a knowingly familiar swarm of Korg keys emerges to take the vibes up again and the whole feeling is one of pure euphoria, and this feeling lasts right up until the piece fades out.

Mind Killer is a brilliant piece of work and shows just how Blanck Mass is letting his music evolve and the improvisational nature of this piece demonstrates this to an insane degree. Mind Killer was live streamed as a performance and has acted as a way of escaping the chaotic past eighteen or so months and now that things are starting to open up again, let’s hope that Blanck Mass will perform Mind Killer in full in a live environment as that would be an immense prospect, until then though, immerse yourself in the fulfilling techno glory of Mind Killer.