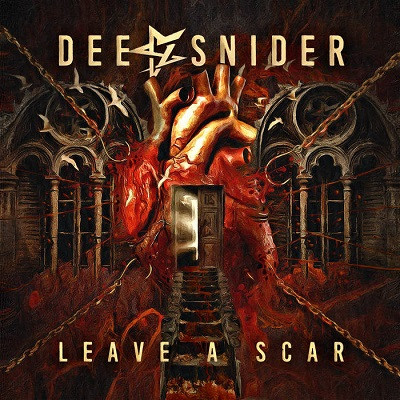 Leave A Scar by Dee Snider

When Dee Snider released his first full-length solo debut For the Love of Metal in 2018 on the Napalm Records label, produced by Hatebreed’s Jamey Jasta, it was like an eruptive cannon blast for Snider proving to his fans that he’s more than just a front-man with Twisted Sister. This was him in his brutal, powder-kegged adventure to raise hell like no other! Now during the pandemic, Leave A Scar, the follow-up to his 2018 solo release, exhibits Dee’s return with more blood and guts! With Jamey returning to the production level, followed by mixer and drummer Nick Bellmore, Leave A Scar gives Dee more thrashing attitudes that metal-heads will get a real kick out of.

‘Before I Go’ proves more heavier guitar riffs as Dee shows that he’s not just saying goodbye, but when the time comes, this song shows that he’s been fighting against censorship from day one. It showcases Ozzy’s Blizzard of Ozz-era meets Metallica’s Reload sections done in the style of the Randy Rhoads riff intro of ‘I Don’t Know’ with pummelling drum work, and then going into battlefield.

‘Open Season’ starts with the line “Hey Motherfucker!/Are you kidding me?!/You better get ready!/This is a lesson that I give for free!” Dee is your new teacher for the first day of school. So, if you’re expecting an Algebra lesson, hell to the no, this ain’t no class section for that. Dee proves that he ain’t fuckin’ around if someone pushes the wrong button, he will fight back, no matter what.

It is a fighting composition by giving people a big reality check on who they’ve become by hurting others while ‘Time to Choose’ starts with a monstrous bass introduction. Dee goes black and extreme metal with a Venom-sque sound thanks to Cannibal Corpse’s George “Corpsegrinder” Fisher who gives a snarling-like vocals for the attack that’s happening as the gore fest is happening as they go medieval on yo’ ass!

If you thought ‘Tomorrow’s No Concern’ from Dee’s debut was done and dusted, Dee is only getting started with the opener, ‘I Gotta Rock (Again)’. It is a continuation on where the second track had left off. He’s free from being chained as he gives Nick some tidal waving instructions on his drum kit, followed by Charlie and Petrino’s duelling midsections towards the finish line.

‘All or Nothing More’ showcases Dee going inside Steve Ditko’s comic book character, Mr. A. He is a detective who has a belief system representing that only good and evil comes with a price with no moral grey area. And once you make the choice, it comes with dire consequences as Charlie and Petrino give Dee more machine gun bullets with some call-and-response segments. Dee has shown a softer side with power metal approach on ‘S.H.E.’ as it has increasing temperatures that would make the furnace explodes, Dee explains that no matter how much he went through the good and the bad, the love of his life has been there for him. Knowing that he has a big heart inside him.

But once we go into the struggles to carry on by ‘Crying for your Life’, it becomes a hard walkthrough to be reborn. The subject of abuse and bullying hits home for the person damaging others. Dee brings everything to the kitchen table and confronting the enemy that has hurt so many people, to look at themselves in the mirror, understanding that the damage is already done as their skeletons are coming out with a big blast from the closet. And it is an old rotting wound that will never, ever wash off. ‘In for the Kill’ returns to the power metal sound as Dee channels some powerful Blind Guardian-sque sections honouring Hansi Kursch, and the late great Ronnie James Dio. Leave a Scar is Dee Snider coming back for more revenge.

He has shown a lot of strength and courage by adding the thunder throughout the storming structures during these crazy times as he strikes lightning on his second solo release. And while he has that gigantic hammer Mjölnir, that Thor himself has passed it to Dee Snider as he says to him, “A sacred bond unites all those who have e’er been privileged to wield Mjölnir! A bond which stretches into Infinity!”