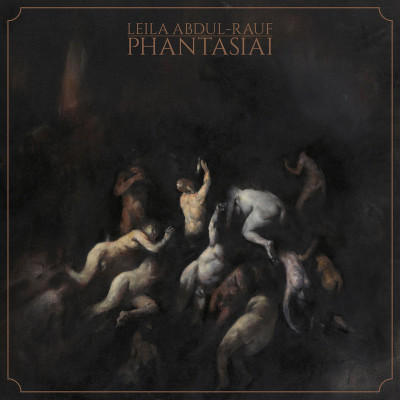 Like the music from the 2008 and 2019 video games Dead Space and Close to the Sun, mixed in with elements between The Amorphous Androgynous’ collaboration with Peter Hammill’s We Persuade Ourselves We Are Immortal, Tangerine Dream’s Zeit and Atem, followed by Klaus Schulze’s Irrlicht and Popol Vuh’s Aguirre, Leila Abdul-Raif, whose best know for her work with; Hammers of Misfortune, Vastum and Cardinal Wyrm, is no stranger when it comes to weaving soundscapes, her own idea of a film score, and classical-electronic textures. She has shown her own visual effects of a world filled with dream and dark troubling atmospheres on Phantasiai.

Released on the Cyclic Law label, Leila’s new album is a movie inside your mind. Following in the footsteps of David Lynch, Stanley Kubrick, Andrei Tarkovsky, and Fassbinder’s 1973 sci-fi TV miniseries World on a Wire, Phantasiai is a two-part suite containing four movements. Composed entirely from vocal performances, live trumpet, modulation, and glockenspiel, you feel that Leila has recorded the material inside a gothic cathedral church in the middle of Montreal.

One called ‘Distortions in Phantasy’ and the second entitled, ‘The I Emerges’ are both in four movements. You feel that as if you’re not only inside a dream, but inside this abandoned spaceship that has been stuck in time in the middle of our solar system. Once inside, you notice that something has gone horribly wrong. And the puzzle pieces become trickier by the minute.

You can almost hear a pin drop from the moment the first composition begins while Leila takes us into an area of a futuristic city that was once a gateway towards the future, has now become a warzone. And getting out, is the hard part. There is a moment in the third movement on ‘Distortions in Phantasy’ where not only the trumpet echoes in the middle of the forest, but connecting middle-eastern vocalizations and post-processed filtered versions that Klaus Schulze had done with the Colloquium Musica Orchestra on ‘Satz: Ebene’.

It captures those droning effects which would had made Klaus very pleased to see what Leila has done to tip her hat to the electronic maestro. ‘The I Emerges’ is a spiritual journey throughout the voyage of the body, mind, and spirit which have now been annihilated. Leila has transformed this piece into an alternate score throughout the last 23 minutes of Stanley Kubrick’s 2001: A Space Odyssey, and the mysterious restricted site of the “Zone” in Andrei Tarkovsky’s Stalker.

There is something Ligeti-sque that Leila does. She adds more fuel to the fire by giving it that little spark on what is happening in this dystopian landscape that we as a listener are going through. And Leila captures that nightmarish quality.

Suzanne Ciani once said, “There’s something to be said about all music being some translation of our languaging, our way of communicating. It’s a language. This is a language.” For Phantasiai, is a language of a disturbing dream that has been brought to life of our own hallucinated voyage in the middle of our own hallway of mirrors that Leila has opened up the doors to say, “Come inside, this is what we’re going through right now, this is what’s going on. And you need to pay very close attention to what you’re seeing from beginning to end.” And the mirrors on her latest release, is quite the revelation.