(((O))) Review: Moderate Rebels – If You See Something That Doesn’t Look Right II 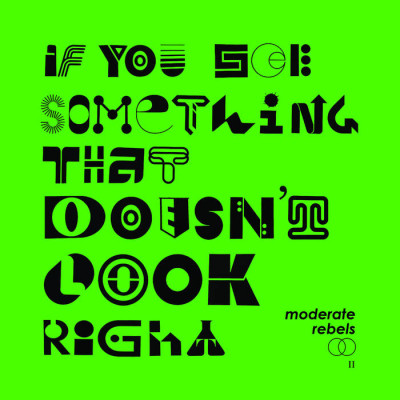 Yes, it does make you wonder what that ‘Part 2’ stands for in the title of Moderate Rebels latest release with the full name of If You See Something That Doesn’t Look Right II. The answer is seemingly very simple. It is actually part 2 in a trilogy of releases from this collective. But why seemingly?

Well, this eclectic, evolving collective with core members of Kate Worthington (vocals), Susan Milanovich (drums), Emma Faulkner (vocals), Mo Bruce (keys/synths), and Anna Jones (bass) has decided to come up with a very current theme these days – a dystopian one.

Fear of what the future brings us is quite heavy and it usually gets heavy, somber tones when expressed through music. Yet, based on this Part 2, Moderate Rebels have decided to take a completely different musical approach, the one you would actually connect more with lighthearted, summery themes.

As the band says about the album, “it mixes what we think of as a sensible distrust of authority and a dark sense of humor. The writers we like have ambiguity in both characters and storylines and we’ve aimed to incorporate this.”

And it is that dark sense of humor that permeates the album and fully justifies the musical approach the band takes here. This approach also overcomes the key hurdle that can come up in collective projects. Very often, those turn into a hodgepodge of incongruous ideas that don’t sit well together.

On If You See Something That Doesn’t Look Right II there is a very unified sense of ideas and their presentation making it work like (a dark) charm. Even more so, it stands alone well on its own, whether you’ve heard Parts 1 or 3 along with it.