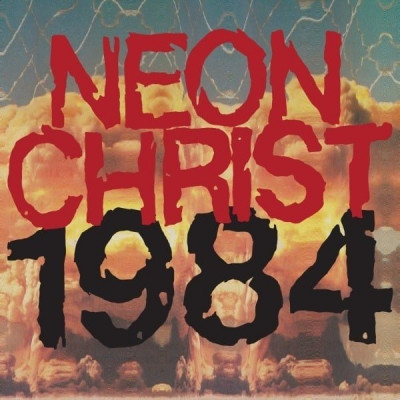 Neon Christ were an Atlanta based hardcore band that were active from 1983 to 1986 and while not as well known as some of their contemporaries, they remained cult favourites among hardcore fans and despite not realising all that much material. The band played shows with the likes of Dead Kennedy’s, Corrosion Of Conformity and Circle Jerks and featured guitarist William DuVall, who went onto join the reformed Alice In Chains as vocalist and guitarist. But well before that he was playing lightning fast hardcore with Neon Christ.

Even though the band split a long time ago, their spirit remained and when Southern Lord founder Greg Anderson got in touch with the band about reissuing their early material. The seeds were sown to get the music of Neon Christ out there again, and the results are 1984, a collection of music from the band at the height of their powers. With a special edition released for Record Store Day and a full release coming thereafter, there is more than a chance for all to discover or relive the power of Neon Christ. 1984 combines the original Neon Christ EP and the Labor Day Sessions and it is a fine collection of mid-80s hardcore, lightning paced as well as raw and uncompromising of course, but also with the right amount of melody in amongst the hardcore maelstrom.

It is that hardcore maelstrom that defines Neon Christ to an extent, with songs like ‘Draft Song’, ‘Bad Influence’,  ‘We Mean Business’, ‘Doom’ and especially ‘Yoof’ (think ‘We Suffer’ by Napalm Death!) all blasting through and ending before you have time to catch your breath. But there is also a lot of musical experimentation in the band’s music especially on tracks like ‘Neon Christ’, the quick paced groove of ‘It’s Mine’ the gothic tinged ‘The Knife Cuts So Deep’ and especially the atmospheric ‘After’ that definitely sets them sort from a lot of hardcore bands who were active at the same time, and shows how open to experiment with different musical styles the band were as they went on, while at never losing their hardcore edge.

Neon Christ have got back together for a couple of shows over the years and while they have not got back together permanently, hopefully the renewed interest in the band after this release will make them consider doing so. But even if this does not happen, there is 1984 and to immerse yourself into this release, is to check out just how good a band Neon Christ were and it may have taken a while but it is great to see the band get their flowers now.