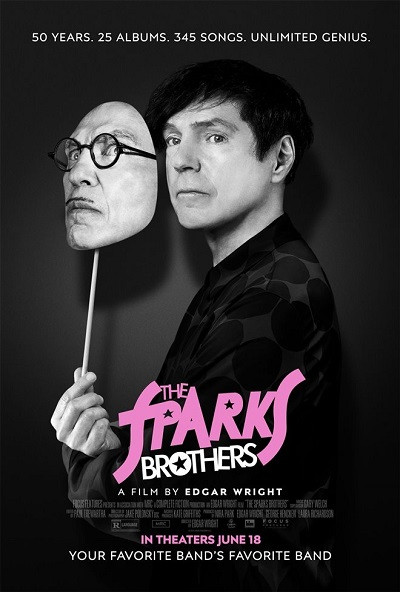 The Sparks Brothers by Sparks

“Throughout all of the years that I’ve been making music, if you get on a tour bus and you sit on a long drive with a bunch of musicians, eventually, that conversation will go to Sparks.” Beck is so spot-on about the maestros of who took the genre of Pop to a whole new level. For Ron and Russell Mael, it was more than just that one hit song, ‘This Town Ain’t Big Enough for the Both of Us’. They weren’t just glam, synth-pop, or punk, but more like Surreal Dadaism Pop.

Edgar Wright, whose documentary about the band’s career entitled The Sparks Brothers, he’s the right person to bring their story to life. Twenty-five albums and five-hundred songs later, Sparks are still going strong. And there’s no stop sign for Ron and Russell. From their middle-class background in Pacific Palisades, California which is the Westside region of Los Angeles, their Dad was their influence of having them listening to Bill Haley and the Comets, Little Richard, and Elvis.

Since launching originally as Halfnelson and then Sparks with their first two albums which didn’t do well in the States before moving to England, it was time to go beyond what David Bowie, Alice Cooper, Slade, and T. Rex were doing. And for them to be in the middle of the Glam-Rock movement, they fit in at the right moment at the right time.

From their appearance on Top of the Pops in 1974 and word-of-mouth starting to spread about them, you could tell that this was a make it or break it period for Sparks. And with Kimono My House, which their humoristic nod tipping their hat towards the female models of the Roxy Music album covers.

It not only covers that, but for them to move forward from Glam, Punk, Synth-Pop, and Chamber classical pop, it’s quite a 2-hour adventure with support from artists such as Steve Jones of the Sex Pistols, Jason Schwartzman, Todd Rundgren, Thurston Moore, Jane Wiedlin of The Go-Go’s, Neil Gaiman, “Weird Al” Yankovic, and Tony Visconti who produced Indiscreet. Not only that they love their music, but the love and honor for collaborations they worked with from Todd to Tony, Giorgio Moroder, and the collaboration with Franz Ferdinand with FFS (Franz Ferdinand Sparks).

It wasn’t just their sense of humor, but the interviews they would do from archival footage from American Bandstand while Ron steals the show with some monotone-esque vibes. He is good at trolling the interviewers, but with fun. I almost felt this Andy Kaufman-esque vibe that Ron would do. You were not only in on the joke, but the joke was completely on you.

Often misunderstood and whether you get them or you don’t, it’s time to give Sparks a whole lot of recognition they deserve. Now for the first time, they not just wrote a script, but a score for their own movie starring Adam Driver and Marion Cotillard entitled Annette directed by Leos Carax. It premiered at the Cannes Film Festival on July 6th. So have Ron and Russell’s circle come in full? We may never know. But this is not just a documentary, but the number one film made in heaven.