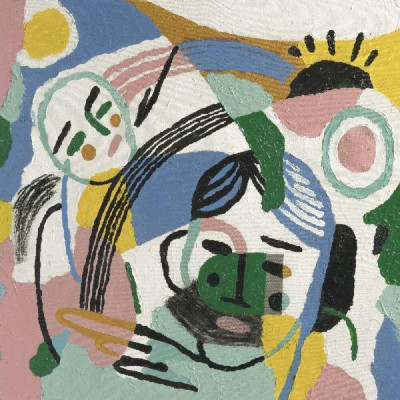 Not since the ecstasy riddled corpse of Shaun Ryder and co befuddled not just themselves but an entire audience of Friday night Top Of The Pops viewers, has a band from Manchester sounded so ingratiatingly “up for it” as W.H. Lung. Emblazoned sounds gratifying a synth pop majesty, turned up to an eye blistering 11 in search of the lost disco chord, they are band of the people. Summoning up the creative energy of an underground rave, mixed with the lights of Studio 54, and because this is Madchester all over, more than an ounce of Can. So far, so heard it all before, until you let those glaciers of sound emanating from debut album Incidental Music throw you directly into the heart of the dance floor. Idiosyncratic dance moves aside though, and look out for those later as you join the blank eyed throngs at the inevitable starburst that will be their crowning glory, there is still work to do.

That work comes in the form of new album Vanities, and for anyone wondering quite what has happened to music these days as it splinters off into either the new weird or the new boring, raised on a diet of bedroom recordings thrown together on Bandcamp in the hope of snagging a few drifters, here is a band who not only want you to listen, but also want you to join their cult. That is what it is, no more, no less, a cult of disco extremes led by the captivating Joseph E (Joe Evans). the letter E for enigmatic, or just ecstasy, or is it both. Judging by the performance on this album, it is all and more

More assured than on their debut, Vanities sees them finding space in their sound, allowing for breathing room amongst the heady synth epics which once again floor you into submission. Take ‘Showstopper’, a song whose minor heartbeat of a start explodes into a bass driven dance-floor behemoth. Where previously they would have filled the space with motorik grooves washing over you, here it is the space in between the instruments which provides the impact. The expansion of the band has led to an expansive sound allowing for more creativity.

Vanities is the sound of late night Manchester, as skeletal frames throw shapes against a backdrop of electro beats. A city of extremes, all joining together to celebrate the uniqueness of the surroundings, it’s what drove the Hacienda to the forefront of a generations minds, and here is no different. W.H. Lung carry on the tradition of not just The Mondays, but bands like New Order and Cabaret Voltaire amongst others, who pushed away from mainstream, but in doing so somehow managed to define it. From the slow burn of ‘Calm Down’, through the hands in the air ecstasy of ‘Pearl In The Palm’ to the call to arms that is ‘Somebody Like’, they take the tradition of all those bands, throw in the rich clubbing history of the city, and find themselves at a place which is surely primed for them to become the next big thing. You can already smell the festival crowds exploding in joyous heat as they pump the air in defiance of “the man”. They’re the type of band we need right now, and Vanities is just the album we may have been waiting for.