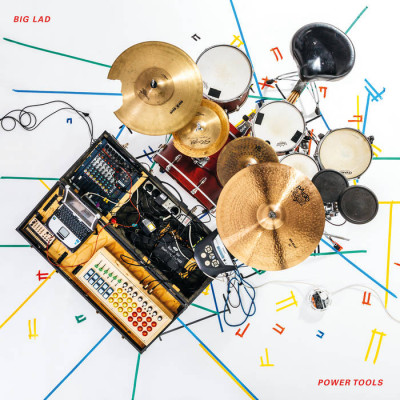 Big Lad follow up the brilliance of their high octane 2018 album Pro Rock with Power Tools, an album that somehow ups that record in the energy stakes, but with plenty of slower tempos on their as well to make this an all encompassing and eclectic listen. Power Tools shows that after all the panic, uncertainty and doom and gloom of the past year and a half, there is still room for a party full of both highs and lows and Big Lad are soundtracking it.

From the first beats that kick off opening track (and very aptly named) ‘Big Juggernaut Rave Party’, the opening of the album doesn’t let up with huge beats and pounding drums being the order of the day and the subsequent tracks ‘Prince On Crack’ and ‘People In Their Eiffel Towers’ are nonstop blasts of sheer power that don’t let up for a second. Just when you think it’s going to be an all out aural assault throughout, what comes next allows you to catch your breath with the trippy ‘Gary The Singer’ and the melancholic electronica of ‘Benny Was My Friend’ acting as chilled out and beautiful sounds that counteract the beat driven madness of Power Tools opening salvos.

After that, the album explodes again with the explosive hardcore rave meets hardcore punk of  ‘Bangerman’ and the discordant brilliance of ‘Self Care Is Cancelled’ before the more menacing ‘Tony The Singer’ acts as another interlude, this time adding a bit more of chilling vibe to proceedings.

The frenetic side of Power Tools and the serene side of the record collide on ‘Gal Dove’, which features some breakcore /Amen-esque breaks with an anthemic groove soaring through the track, all completed with ethereal vocals and the results are amazing. ‘Maaaate’ is another non stop electronic gem that is guaranteed to get dancefloors hyped up. The album closes with the more downbeat  but electrifying ‘Hot And Decaying’ and ambient album closer ‘With Thanks Rave In’ (another apt and brilliant song title!), a track that signals both the end of the album and the end of this particular party in sublime fashion,

Power Tools is an album that shows a lot of different sides to Big Lad and their sound and it has to be said that all of them are top notch, with so many twists and turns throughout. It’s a nonstop journey through the music of Big Lad, but one that takes in so many emotions. From start to finish this album is triumphant and a much needed experience.