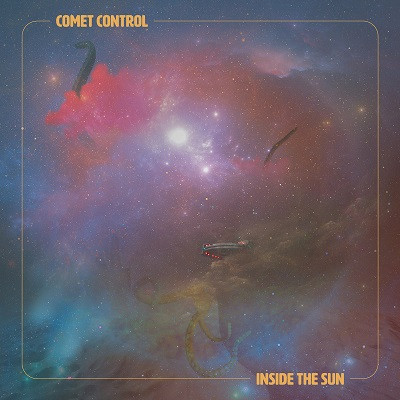 Inside The Sun by Comet Control

Formed out of the ashes of Quest for Fire, Comet Control are paving the waves for Toronto’s own answer for a crunchy-tasty psychedelic doomy metallic force of power. So far the band have released two studio albums from 2014’s self-titled debut and 2016’s Center of the Maze. This year released on the Tee Pee label, the band has unleashed their third studio release, Inside the Sun.

Guitarists Andrew Moszynski and Vocalist Chad Ross, Keyboardist Jay Lemak, Bassist Nicole Howell, Drummer Marco Moniz and featuring Godspeed you Black Emperor’s Sophie Trudeau on violin, this album will take listeners into a sonic garage-rocking adventure that will make your ears vibrate very loud! So let’s hurl through the cosmos throughout some of the highlights on the hottest fire that is burning across our solar system.

You can hear aspects of Motorpsycho, Krokofant, El Doom and the Born Electric, and the Electric Prunes thrown into one. Now I’m not talking about Black Sabbath, because they’ll get pigeonholed for that, but they throw in some aspects of the Psychedelic sound and the Krautrock genre thrown in. You can tell that there is something special cooking throughout the Halls of the Mountain Grill.

‘The Afterlife’ echoes Aphrodite’s Child’s 666 thanks to Lemak channeling the surreal nightmares Vangelis comes up with throughout the introduction on the climatic 19-minute epic ‘All the Seats Were Occupied’. Swirled and nightmarish, Moszynski’s calm before the storm echoes some effects to give Chad mournful sections by saying goodbye to a loved one.

Both ‘Keep on Spinnin’ and ‘Secret Life’ are Punk Rock at its finest! For ignition to get engines up and running, tidal waving surf drumming pounders from Anderson, and hardcore psychedelic light-speeding synths, they are throttling riffs with screaming leads for a full-scale assault towards the sky with hypnotic double-tracking vocals.

‘Good Day to Say Goodbye’ has chugging grooves thanks to Ross and Howell’s train ride into the unknown lands. As Lemak carries a lot of the heavy organ work, it becomes an elevating boost from the midsection as it deals with a structure to say goodbye to the past and present, and looking forwards into the future.

The title-track has some Glam-space rockin’ crunches with a foot-stomping bass drum effect that has a punching sound. Going inside the fiery heat, it has some snarling Hawkwind-sque textures, followed by the rhythmic vibrations of Black Mountain to add those ingredients Comet Control would cook up.

This here is a band to watch out for in the Toronto circuit. They have taken the genre into a breaking rule book momentum that screams out with pure motherfucking vengeance! So if you want to go for a ride with Comet Control’s music, turn this mo-fo up really, really loud! Because Comet Control’s Inside the Sun is the cosmic voyage that we’ve been waiting for!