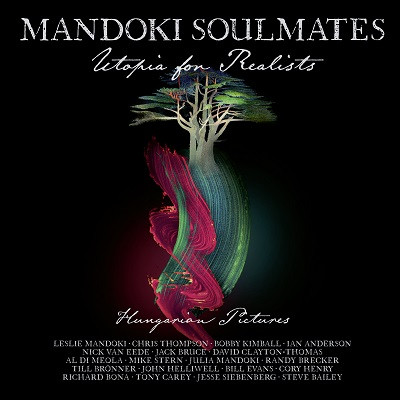 “So easy to get lost/You’re fire and fury/In a utopia for realists!” Wait a minute, something’s afoot. It’s quite the ride embarking with ManDoki Soulmates again. Last year when everything came to a screeching halt during the pandemic, I received a giant package that came in the mail which would later be the 2-CD set of ManDoki Soulmates’ Living in the Past + Hungarian Pictures. It took me a year on whether I was going to accept it or not.

The first time I heard it, I was thinking to myself, “They’re not even trying. What is this? Do I want to toss this thing into the bin or give it another shot? This is all smooth music and not prog!” I had the same similar situation with albums such as Magma’s Mekanïk Destruktïẁ Kommandöh, Captain Beefheart’s Trout Mask Replica, and the Electric Light Orchestra’s 1977 classic, Out of the Blue. Albums grow on you. Even though it didn’t click with you the first time you heard it, you have to give it another spin.

And then I listened to it again this year and I realized, “Wait a second, it sounds different, but Leslie wants to take it to a whole new level.” And the third or fourth time, I fell in love with it. Now in 2021, Hungarian Pictures has returned once more as a brand new visual release from the InsideOut label entitled Utopia for Realists: Hungarian Pictures that includes the Blu-Ray along with the original CD.

Watching the visual release of the album you can just close your eyes and being at the different venues where ManDoki Soulmates were playing during that time frame. Not only you’re supporting the ensemble, but being a part of the journey with Bartok’s music being told in a whole new format.

Part concert, part documentary, and part movie, it is Leslie’s answer to Walt Disney’s 1940 cult classic, Fantasia. From the moment Szaksci’s piano begins on ‘Sessions in the Village’, the adventure is about to begin. And once the visual paintings come to life on ‘Utopia for Realists’, Cory Henry lays down Keith Emerson-sque sounds on the Organ.

Followed by Di Meola’s classical textures, Brecker’s trumpet giving the audience an alarming wake-up call, and John Halliwell’s snake charmer sounds on his sax, it is a ride into the unknown for the horn section. Then, the ensemble travels into the darker territories from the final climaxes of Van Der Graaf Generator’s ‘White Hammer’ before Nick Van Eede helps audiences meditate throughout the stormy sequences throughout the craziness that is going on in the outside world.

As the hand comes to life out of the chalkboard from ‘Transylvanian Dances’, it is free of being trapped in that steel base and is free to take a trip down parts of Budapest I believe and have a lot of fun with the music. We look at the amazing architectures from the various locations from the 18th and 19th century before Leslie pounds the drums like no other!

Bona’s Bass sets up these landscaping waterfalls channeling not just Stanley Clarke and Matching Mole’s Bill McCormick, but the late, great Jaco Pastorius as he dives into the sea of wonder impressing both Leslie and Cory in the studio. It changes into a Floydian atmosphere as Mike Stern goes into David Gilmour’s territory by channeling sections from A Momentary Lapse of Reason to The Division Bell. On the screen, we see ballerinas dancing to the music in various locations as Becalossi’s accordion increases the temperature level.

The last ten minutes of ‘Transylvanian Dances’ becomes a volcanic roar for each of the musicians to create this dancing environment by going into this galloping yet fiery reminiscent of the Mark II-era from Deep Purple. Leslie’s soothing vocals calms audiences in the venues down.

Despite what he went through, he is an amazing father to his children as he hugs both Julia and Gabor during the concert on the Blu-Ray. Not only that he fled from Budapest to Munich in 1975 to avoid being prosecuted in the Communist regime for being a member of the student opposition, he is not only a fighter, but a survivor. And he is one hell of a musician to bring ManDoki Soulmates to life since 1993.

And then Cory comes back into the frame with his Hammond once more. This time channeling the vibes of the late, great Bo Hansson and Fats Waller. ‘Return to Budapest’ gives Richard and Julia this envisioning structure of duetting together. You can hear reprises from the opening track before Bill Evans’ sax cries out in the venues they’re performing at.

Moody, spiritual, and psychedelic, Leslie knows his Prog-Rock very well! Watching the visual film, you can see Les working hard in the studio at times to bring the album to life from CD to concert. Knowing that the spirits of Greg Lake and Jon Lord are watching over him, it becomes a dueling sword between Les and Ian Anderson.

It is a battle between thundering percussion work and Ian’s flute going all over the arena! Not only that they’re channeling the Folk-Rock trilogy from Jethro Tull, but also the Moving Waves-era from Focus. Then everything changes into a Bartok powering thunder honoring Dave Brubeck, The Nice, and ELP. It is a roaring tidal wave that is blasting with energetic vibes!

When you watch the visual release of Hungarian Pictures, it is quite an extraordinary ride for ManDoki Soulmates to bring this album to life as a short film with incredible music that will keep on going in the years to come. I hope that Leslie continues to make more brainstorming ideas for the ensemble throughout these tricky times we’re living in. And I hope that it’ll be mind-blowing from their next adventure that awaits in the roaring ‘20s.