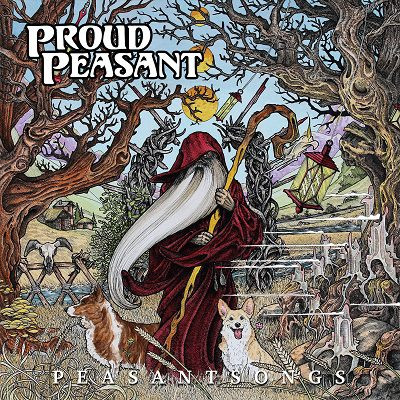 It’s been eight years since Austin based progressive rock band Proud Peasant have released a new album after their 2014 debut, Flight which received critical acclaim in the Prog community. Number one on Amazon’s prog charts, 11 weeks on Tom Gagliardi’s radio program, Gagliarchives, and featured on the BBC Radio show, Stuart Maconie’s Freak Zone.

Formed in 2011 by Xander Rapstine after leaving his conventional band The Evildoers, Proud Peasant is like a stick of dynamite waiting to explode at any second. They have taken the genre to a standstill like no other. That and their latest release this year Peasantsongs released on the Basement Avatar label, is a collection of unearthed material and songs they covered from Touch, Eloy, Manfred Mann’s Earth Band, and King Crimson.

Two of which originally appeared on a Fruits de Mer label in 2016 called Cosmic Sound while covering ‘Red’ at 2015’s VoyagerFest in Austin. Their cover of Touch’s ‘Down at Circe’s Place’ features Houghton and Rapstine channeling Robin Trower’s riffing structures of ‘Simple Sister’ on a loop as the tidal waving crescendo from Dave Irish gives a tremendous roar before delving into the oceans for a melodic waltz.

You can imagine Clif’s bass taking us into the mystical lands of Circe’s territory as it booms with some Santana grooves for a jam during the Abraxas-era. ‘A Prelude’ opens the album with a mournful percussion and wind sounds that gives it an epic renaissance for Lauren Lyman’s flute to set up the barriers on what is to come.

‘Daybreak’ is an Eloy cover from their sole self-titled debut in 1971. With its galloping march, Proud Peasant go into the territories of the New Wave of British Heavy Metal by going into a trip in our solar systems as Frank Bornemann is their commander-in-chief as they make the jump to light speed.

‘Cencibel’ has this Acid Folk background with arrangements done by Tom Newman. It has a bit of Tudor Lodge’s music as they take the band into Kew Gardens for a delicious hot cup of tea. Phil Davidson and Melanie Morgan trade melodies by creating this dance technique that would have given a giant stamp of approval from Xander himself for a calming instrumental.

‘Turbulence’ is Proud Peasant’s return to have Metal in their blood streaming veins! Terrifying whirlpool of terror, not knowing what’s happening on this roller-coaster ride, Rapstine channels the textures of the duo from Iron Maiden’s Dave Murray and Adrian Smith. ‘The Avatar’ starts off with an opening section in the styles of Beethoven’s ‘Moonlight Sonata’.

Jay Allen’s mournful church organ textures, it transforms into another Thrash Rocking voyage with pummeling drum beats by Hobizal for its soft and heavy arrangements. So if you think Proud Peasant are doing a soft album, think twice. This ain’t no Cardi B album!

Recorded live at 2015’s VoyagerFest, their take of King Crimson’s ‘Red’ has some Gentle Giant textures thanks to the vibraphones to get you up and running for an alarming and menacing approach of Crimson’s energetic force that would had made Mr. Fripp very pleased to see his composition being done in a different style Proud Peasant have made.

Now this is where I need to delve into the world of Manfred Mann’s Earth Band. When I think of them, all of think of; ‘Travelling Lady’ ‘Mighty Quinn’, ‘Blinded by the Light’, ‘One Way Glass’, and ‘Ha! Ha! Said the Clown’. But listening to their take of ‘Saturn, Lord of the Ring / Mercury, The Winged Messenger’ as a shuffling blues rocker turned into a Floydian midsection before ascending chaos in the styles of Hawkwind, I need to buy more of their music to see what I was missing.

Peasantsongs is quite a revelation to see what Proud Peasant were doing. Despite the hiatus, it’s a relief to know that there’s a lot of spirit inside them not knowing what they’ve been cooking between 2013 and 2018. And while we wait for their next bridge of Communion in the latter half of this year during the pandemic, it’s time to return back into the oceanic cities of Peasantsongs.