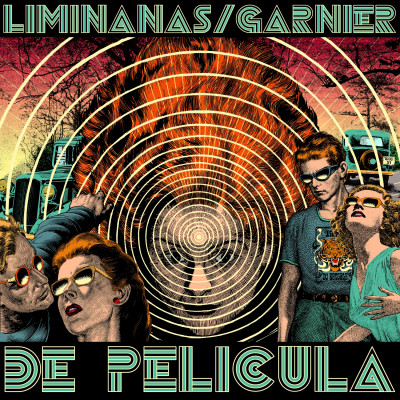 French forces unite! This could easily be the motto for ‘De Película’, this collaboration between Serge Gainsbourg-inspired psych specialists The Limiñanas and Laurent Garnier, one of the more prominent DJs around.

While the combination might sound surprising to some, The Limiñanas artistic duo/couple was actually invited back in 2017 to perform at a festival. What caught the DJ’s attention was the ringtone on Lionel’s mobile, the signature riff from The Kingsmen’s ‘Louie Louie.’ So, the mutual liking finally materialized into an album four years later.

In many ways, it is no wonder that ‘De Película’ sounds like a new soundtrack to ‘Vanishing Point’ (1971), one of the best film noir road trip movies around.

It is all that you would expect from The Limiñanas garage-psych filtered through the ears of late great Serge Gainsbourg and then tweaked with Garnier’s electronic embellishments. Case(s) in point – ‘Je rentrais par le bois’ and slow-burning ‘Juliette dans le caravane.’ Or, actually throughout the album that keeps its concept intact and never faltering either in quality or variety, but then neither of the artists had a problem with that so far.

But what seems to be the touching ground between the two seemingly disparate musical styles. ‘Tu tournes en boucle’ might give the clue here with Can’s Jaki Liebezeit-style drumming and Garnier’s Irmin Schmidt-inspired synth treatments.

And it is that dance-inducing ‘motorik,’ constant movement, enveloped in a quite heavy dose of psych that makes ‘De Película’ work its charms. With ease.