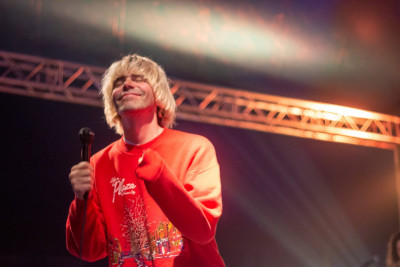 The funny thing with festivals is that often, you find yourself going for one thing, and returning with another. In the case of Focus Wales 2021 it was a plan to report on Welsh acts in particular, but it soon became clear that there was a much greater story to be told here. One of inclusivity, belonging, and the natural joy of being together with music. Perhaps it’s the post-lockdown effect in action, or maybe just a forgotten part of what we all used to take for granted. 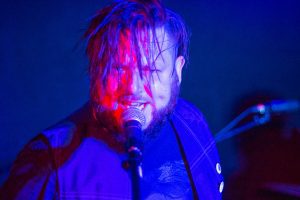 Now in its tenth year (discounting lockdown postponements), Focus Wales has always prided itself on being a festival for emerging talent and whilst this isn’t strictly true (Tim Burgess alone has been in the music game for 30 years), it is those new acts which are the lifeblood of the festival. Not to take away from the joy of seeing the tent erupt to The Only One I Know, or a rather large crowd lapping up Richard Hawley’s excellent set (even if one cheeky punter did describe him as a Butlins Roy Orbison), to see relatively unknown bands making an impact gives much faith that the music industry will survive. 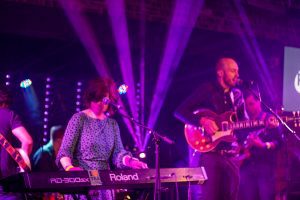 Also acting as a music industry conference, you can attend Focus Wales simply for the discussions, but for this reviewer it was a chance to discover new music, and what variety there is to be had. As if 20 stages spread out across the town of Wrexham wasn’t enough, taking in pubs, clubs, a large tent on the library field, and even pop-up venues in shops, to even scratch the surface of the sheer amount of diversity on offer is a fools quest. Nevertheless, the challenge had been set, and over two days of tramping the concrete, sets were witnessed by artists as diverse as Trandoshan Hunters, Tim and Sam’s Tim and Sam Band With Tim And Sam, Tapestri, Cosmic Dog Fog, BOI, Golden Fable, and Baby Brave. That’s before getting to the more established artists including a triumphant headline slot from that wizard of Welsh music, Gruff Rhys. Did we mention legends as well? How about dancing the night away with Graeme Park in a Hacienda revival, or burning the past midnight oil with Don Letts.

Highlights were aplenty. with a gloriously daft Melin Melyn setting the standard high. Others included a set of pounding heartland Welsh language rock and roll from BOI, whose line-up consists of various members and ex-members of Welsh bands such as Candelas and HMS Morris. Tapestri provided one of the more calming and luminescent experiences with the confines of the St Giles Church, as did Golden Fable who later delivered a set of now stone cold classic mixed in with songs from their latest album. On top of this, Rebecca and Tim also delivered a stunning set from their reformed old band Tim and Sam’s Tim and Sam Band with Tim and Sam. Bandicoot won prize of the festival for most sets (probably!), whilst Baby Brave provided the set everyone needed after the last 18 months, full of gloriously wonky pop with equal parts Black Sabbath. 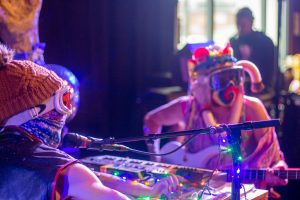 As it’s moniker portrays, the focus is very much on Welsh acts (and what a wonderful, thriving scene there is), but Focus Wales is so much more and every year it partners with countries far and wide to bring the best emerging talent. This year was no exception, although undoubtedly Covid restrictions played a part in stopping some musicians from attending. Canada provided a string of artists, including the magnificent The Brood, but you could also find artists from other climates. This cornucopia of delights all served to provide an irresistible platter of music for the ears, and the dancing feet. It’s the kind of festival where you can watch Gruff Rhys, then a rockabilly act (Hellfire Devilles), on to a brass band act (Band Pres Llaregub), then finally fall into the sounds of Don Letts.

As the last strains of music die down, it’s the smiles on the punters faces that counts most. Old friends, new friends, strangers, all together in communion to celebrate the power of music it sounds corny but after 18 months of no music, we’ll take that. Focus Wales 2021 was an absolute delight throughout, and if you didn’t come home with at least ten new favourite artists then you surely would have come home with an enormous sense that an important part of your life had returned. No-one knows what the future will bring, but at least for the time being Focus Wales (along with many more events) are there to remind us that music is the key to bringing us all together once again.