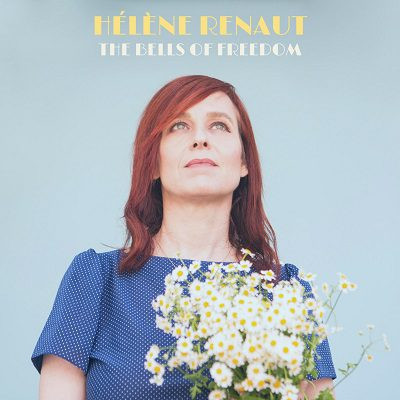 The Bells of Freedom by Hélène Renaut

I have a strange connection to the Folk music genre when I was very, very young. I remember my Mom playing the music of Judy Collins, Pete Seeger, and Joan Baez whenever we would drive somewhere either to a grocery store or a book shop. It was quite intriguing to hear this music from a young age that was beyond the Beatles music. And then many years later, I started listening to the genre from what was known as the British and Acid Folk scene.

It was from the late ‘60s and early ‘70s ranging from; Comus, Tudor Lodge, Mellow Candle, Trees, and Spirogyra. It proved to me that Folk is more than just a four letter word. But one artist is taking that leap for many years. And that artist is Hélène Renaut. Hailing from Brittany, France and living in Los Angeles, California, Renaut is one of those artists that is like a flower ready to bloom at any second.

She is not only an amazing writer, but can play ukulele, guitar, and drums. She took inspirations from Leonard Cohen, Joni Mitchell, The Shirelles, and modern classical music. Her latest EP, The Bells of Freedom is sort of like a diary detailing the landscapes of California. Listening to this EP, it’s like digging through some of your rarest folk albums that were a part of the Pink Island years, Dawn, Transatlantic Records, and the swirling Vertigo label during its golden-era.
The Bells of Freedom is probably going to be added to that list as if Helene is writing a tribute to the genre with a bit of the West Coast vibe. ‘Summer Love’ is sung in the style of The Sallyangie’s ‘Lady Mary’ with its bossa-nova-sun-shining groove. The orchestral vibes of the Venice beaches makes you want to watch the sun go down as Renaut walks, sings, and dance to the beat, followed by some mellotron flute improvisation in the midsection.

‘Let There Be Time’ is a crossover between Nick Drake’s Pink Moon and Nico’s ‘These Days’. Helene takes a drive down the Arroyo Grande, trying to get away from the Hollywood madness in the city of angels. You can imagine her being free from the massive celebrity target spot and is at peace in this quiet and cozy town as the country-rock late ‘60s vibe of the title-track is Helene tipping her hat to The Byrds’ Sweetheart of the Rodeo.

Channeling the arrangements of Roger McGuinn and Gram Parsons with its clock-ticking eerie midsection, it has a calm, moody, and relaxing atmosphere for Helene letting listeners know that there’s a bit of the Nashville sound in her. ‘The Angels Sing’ has this Hawiian-sque vibe of the hula dance.

Nod to both the 1933 classic of Sol Hoopi’s ‘Hula Girl’ and Kevin Ayers’ arrangements, the double-tracking vocals has her singing on a canoe underneath the Caribbean moon as the closing track ‘What Will Tomorrow Bring’ comes to mind of Tudor Lodge’s ‘Kew Gardens’ and ABBA’s ‘I Have a Dream’. You can imagine soldiers going through a rough ride after being in the battlefield, bruised, bloodied, and injured.

And the next morning for them will be a rough ride for the return home, knowing that they will never be the same when they come back to greet their families. Mournful and heartfelt, Helene gives a chance for the troops to take a breather from what they went through. And it’s a calm after the storm, but also a sigh of relief from what has happened with them.

The Bells of Freedom is Hélène’s sign of peace and hope. While everything came to a screeching halt back in March of last year, music has always been there to lift us up. It is a thought-provoking gem she’s brought into for 2021. And I hope to hear more from her in the roaring ‘20s.