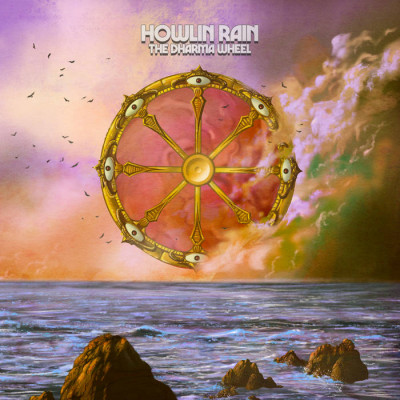 The Dharma Wheel by Howlin’ Rain

Oh man…as the strains of ‘Prelude’ start to drift out of this, the brand spanking new album from those purveyors of finest cosmic rock Howlin’ Rain, it‘s as if the years drop away from your shoulders. You’re back at that moment, as a precocious discoverer of new sounds, much like William Miller flicking through the records left to him by his elder sister, when the sweet sounds of the nineteen seventies come flooding back. It’s as if Captain Fantastic has returned for one last encore, suddenly remembering that hey, hang on…there’s more where that came from. This ain’t no captivating bag of nostalgic reminiscence thrown together for a new generation though. This is Howlin’ Rain. You dig? You will.

Having already teased us with the 16 minute title track ‘The Dharma Wheel‘, a track which lays out in no extraordinary terms that here is band who can take the pure essence of psych rock, jam band, and pure kick ass rock, and put it together in a melting stew of tenacious energy, you would think that maybe there wasn’t much else left in the tank. That ‘Prelude’ alone is enough to cast away those dispersions, is testament to a band who are just hitting their stride. Listen as it crescendos. And let yourself be taken on the ride.

It’s almost a shock then, when ‘Don’t Let The Tears‘ shuffles in like some lost track from Chris Robinson and his Brotherhood. It somehow soon makes sense though, as the funky shuffle gets you two stepping around the kitchen, waiting for the Farfisa organ to kick in and take you on a magic carpet ride. Not even Free were this much fun. A tasty guitar break reminds us of the true power of rock and roll that courses through this band‘s veins, before Ethan Miller returns as the ringmaster, the calling card, the master of ceremonies, leading us into the summer breeze.

There’s a mellower vibe to this album than previously. That’s not to say that they forget to bring the rock. It’s just found in unexpected places such as the explosive chorus of ‘Under The Wheels’ which sounds suspiciously as if the band have been hitting the bongs to a few Eagles albums. There’s no Hotel California bullshit here though, just a beautiful laid back vibe. ‘Rotoscope’ turns up the temperature a notch with it’s sleazy hot city night vibe, kept together by a rolling riff which acts as the driving force whilst the rest of the band take the opportunity to noodle away in the background. Hot city jazz rock filled with the kind of riffs you would sell your soul for.

Which leads us to ‘Annabelle’, and it wouldn’t be a Howlin’ Rain album without a big ballad moment. It’s time for Miller to shine, to display his remarkable voice, and oh man, does this song take you higher. It’s the kind of song which sat deep in your record collections, revered by those in the know, and taking on a life of its own when played live. It’s the kind of song that our friend William Miller and his friends would sing on a tour bus on the road to the next gig. It’s the kind of song which drives you to the record store to pick up the album cover and be there, with your friends. It’s that soul within rock and roll which makes this music so fucking timeless.

You’ve all heard the title track by now, and if not…what’s keeping you? It rounds off a wonderful album which may be one of the finest things you will hear this year. It’s comfort food for your soul and makes you glad that you are alive. When music makes you feel like that, you should cherish it, hold it close. Your cool friends may hate it, but hey, at least you can quote Lester Bangs at them. If that ain’t cool, then what are you doing listening to rock and roll. Howlin’ Rain, we praise you. Good vibes all around.