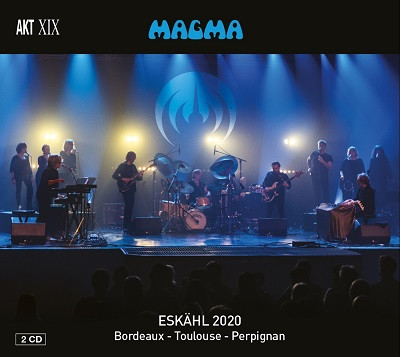 Whether you get it or you don’t, Magma’s music is still growing stronger and stronger each day to blow those doors down with a giant battering ram ready to burst through. Sung in the styles of the Kobaïan language created by founder Christian Vander, they created forms of Jazz, Opera, Classical, Soul, Avant-Rock, and Progressive music for fifty-two years.

This year Magma have released their 19th release from AKT series which covers their archival and musical live recordings. This 2-CD set consists of performances they did for their aborted French tour in Bourdeaux, Toulouse, and Perpignan on March 6, 7, and 8th before everything shut down due to the pandemic and COVID-19.

With a new-line-up, Magma’s recordings from this double album shows that they are ready to go. Like a nuclear bomb ready to explode at any second, they bring an old favorite from their sole self-titled debut in 1970 called, ‘Kobaïa’. From the moment Jannick’s son, Jimmy Top plays his Bass at the Theatre Femina, you can feel an explosion right in front of the audience.

Crescendo midsections, Herve’s vocals come kicking in to bring the house down before it becomes a walking dance across the streets of Paris for both Goubert and Eliez laying down some Traffic-sque grooves from the John Barleycorn Must Die sessions before Blas’ distorted guitars goes upwards with Vander clashing like a madman.

Destefanis, Fisichella, and Gurrato help along with their vocals as if they were conducted by Stella Vander. They go up and up to a killer finale with lukewarm applauses. ‘Ẁurdah Ïtah’ becomes an alarming wake-up call at the performing arts center, El Mediator. Aknin’s high-pitch vocals startled me at first.

When he sang like that, you know trouble is brewing. I know it caught me off-guard, but I can imagine it was a gigantic ride that took audiences from the Theusz Hamtaahk trilogy. I felt some tugs towards Stravinksy’s ‘Rite of Spring’ from the Indian tribe sequences the rhythm section were doing. As they go into a calming turned rising mountain top scenario, the chemistry between the singers and Top’s bass, are like a magical potion brought to life.

Goubert and Top add more lava from the volcanoes into a James Brown approach as they make a bit of a reprise from ‘Mekanïk Destruktïw Kommandöh’.  You can feel a presence of the piece from the ‘Itah’ piece, but boy Magma know their operatic touches very well! ‘Auroville’ gives the band members a break as Goulbert and Eliez share a duet together on the keyboards.

They do a smooth, romantic wave that is like a cross-over sound of Tomita, Soft Machine, Wes Montgomery, and Gentle Giant’s Kerry Minnear thrown in. The last four minutes of the instrumental piece goes into a video game-like score to the Sega Genesis classic, Ecco the Dolphin.

‘For Tomorrow’ feels like an alternate score to a late 1940s, early 1950s film-noir story in black and white. Vocals on here are poetic. Continuing in the styles of the Modal Jazz sound from Miles Davis’ ‘All Blues’, Vander takes center stage in the last three minutes of the song.

He pounds those notes on his drum kit as if the spirits of Tony Williams, Elvin Jones, and Jimmy Cobb are watching him in awe, knowing that he’s still got it. While Blas comes in, he does a bit of Wes’ guitar textures to a standstill at Perpignan. Then, they close it out for an early Halloween treat for the spooky thump, ‘Troller Tanz (Ghost Dance)’ from their sixth studio release, Üdü Ẁüdü.

Whenever Magma releases either a new album or some of their archival recordings, I know that I would be the first one to be on the look-out for it. Because I know that something special will be unleashed to see what was hidden from their vaults they’re about to reveal. And the Eskähl release is more of what to expect from the visual journey of Magma’s music.