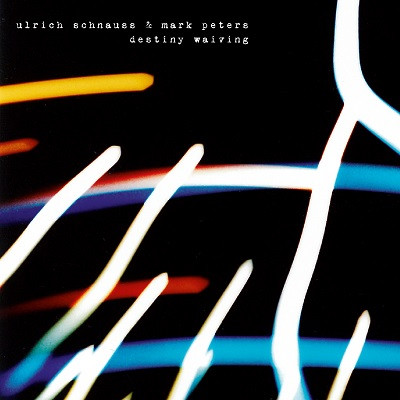 Like finding a diamond in the middle of the rough, the collaboration between Ulrich Schnauss and Mark Peters seems to be the perfect combination to create these mystique watery landscapes that you would see in all of its glory. Destiny Waiving is like a real documentary that is brought to life.

Released on the Bureau B label, Schnauss and Peters brings the trilogy in full circle. It started out with 2011’s Underrated Silence and 2013’s Tomorrow is Another Day. Now with Destiny Waiving, it took the duo three years to bring this album to life. The album started out at Ulrich’s East London home and the final mixes was completed late last year during the pandemic.

Schnauss is a German electronic musician hailing from the northern seaport of Kiel. It’s been 20 years since his debut Far Away Trains Passing By. He has made a name for himself after joining with Tangerine Dream in 2014 as he appeared in the 2017 release on the Kscope label, Quantum Gate.
Mark Peters has a very different musical background. Born in Liverpool, he is the founder of the dream pop band, Engineers. He would add textures that are filled with mysterious backgrounds. Back in the same year when Tangerine Dream released their first full-length album after the passing of Edgar Froese in 2015, Mark release his debut album as a solo artist entitled, Innerland on the Sonic Cathedral label.

The inspiration behind that album were places that Mark would go to when he was growing up. When I think of electronic duos, I think of Burnt Belief, Jon Durant & Stephan Thelen, Cluster, and the collaboration between Stick Men’s Pat Mastelotto and Markus Reuter’s Face album. For both Ulrich and Mark, they are going to be up on that list with the masters that I’ve mentioned a second ago.

Since we’re talking about documentaries, Destiny Waiving is sort of like that. Exotic locations from around the world that the duo create for the small screen. Not for a big, gigantic massive Hollywood budget, but a real movie brought to life. The sounds on this album are quite a spectacular visual as Peters and Schnauss take listeners throughout various mountains and beaches in the heart of Dubrovnik.

Most of it is a tribute to both Steve Reich and the late, great David Bowie from his Berlin trilogy that is captured throughout the entire album. You can hear aspects of the instrumental sections that could have been inspired by Heroes, Low, and the Outside album from the Nathan Adler diaries.

It has rising momentum that Mark would give Ulrich a chance to go for a helicopter ride to go for another viewing of the landscape that has more beauty than ever before. And what an adventure it is to look at those gorgeous waterfalls that the duo would create for this alternate score of Godfrey Reggio’s The Qatsi Trilogy.

There are vibes of a new beginning as you get off the train to enter the cities by starting a new chapter in your life with rising ambience that comes at you unexpectedly as the end credits start to roll up the screen. Destiny Waiving is a genetic release that the duo unleashed this year.

There is something special that I always embark on. Whenever someone goes for the ultimate challenge, Ulrich and Mark are the ones to take up the ante. And I hope to hear more from the Bureau B label in the years to come. But Destiny Waiving brings the curtain down for one final story that is unveiled on the silver screen.