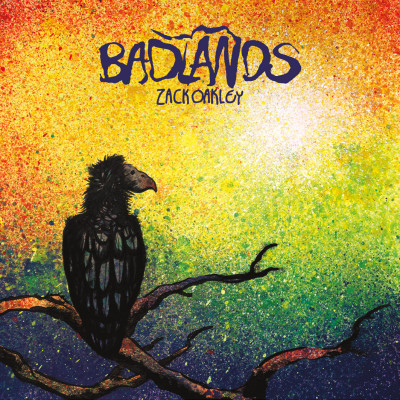 When was the last time you dug deep into something that falls into the category of ‘classic rock?’

Ok, so maybe too much stuff has been lumped there, and so many people have different views on what belongs within the classic rock, but in this case, we’re speaking about one thing – the one that goes by the name of heavy psych, with a lot of blues and prog elements thrown in. Oh, and it is not a question of a release from way back when, the late sixties or anytime from the seventies, but something that has been just recently recorded?

Maybe such music is becoming a lost art, the term art being brought in if it is a case of a band/artist that really have that sound fully under their belt with some stinging guitar sounds, with slide, wah-wah and other ‘classic’ histrionics all over the place?

Can’t remember? If so, then you just might do well to refresh your memory with the recent debut release of ‘Badlands’ by San Diego’s Zack Oakley.

Yet Zack is not exactly a novice. He has been playing in bands that pursue similar sounds like Joy and Pharlee (for which he still plays the drums), and throughout ‘Badlands’ you can hear that he has that sound deep down, particularly in his guitar-playing fingers.

You don’t have to go much further than the title of one of the tracks here, ‘Acid Rain,’ and what you get within that title is exactly what you can hear in the song itself.

Actually, that retro heavy psych sound is all over ‘Badlands,’ that it is quite refreshing to hear it all over again.