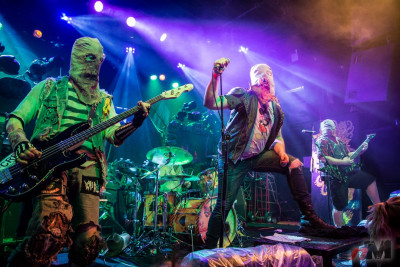 It went as well as could be expected. About a thousand fans were slaughtered like rabid dogs, I contracted a slew of previously unknown social diseases, and I didn't even break a string. All in all, a rousing success.

Masters of macabre thrash metal Ghoul have returned from the grave with Live In The Flesh, a live concert that shows the energetic power of the band in a live environment. Gavin Brown caught with Ghoul vocalist and guitarist Digestor live and direct from Castle Grayskull, Creepsylvania to discuss Live In The Flesh and their return to live shows as well as touring with GWAR and Cannabis Corpse, video nasties, smashing Nazis, working with rapper Ill Bill, all things thrash metal, covering Megadeth, the Misfits and Kim Wilde and much more in a very entertaining interview.

E&D: You are just about to release your first ever live concert video Live In The Flesh. Are you excited to get that out there?

Digestor: I am but my parole officer is none too pleased, I can tell you that.

E&D: How did the gig that the video was filmed at go?

Digestor: It went as well as could be expected. About a thousand fans were slaughtered like rabid dogs, I contracted a slew of previously unknown social diseases, and I didn’t even break a string. All in all, a rousing success.

E&D: You’re bringing it out on VHS. What are some of your favourite VHS classics and video nasties?

Digestor: I’m partial to my copy of the Texas Chainsaw Massacre 2 with the weird warble and hiss that plays through the entire movie. Well, that and my copy of Safe Food Attitude, an industrial food safety video from the 1980s.

E&D: You did a livestream for the release of the video. What has the feedback been like for it so far?

Digestor: The feedback was constant and unremitting and I promise you we are firing that audio engineer. He’s gone. It won’t happen again. But the fans didn’t seem to care, simple dears that they are. In one hour we sold out of a live video on a format that hasn’t been widely used since the Thatcher administration. Not bad!

Digestor: Actually Dissector and I livestream on Twitch every Saturday at 9 pm PST! Be there! Just look up therealdigestor and dissectorghoul on Twitch.

E&D: Are you looking forward to hitting the road again soon and have you got any dates planned?

Digestor: We have a show in San Francisco at the Great American Music Hall on November 26th and we’re playing the Decibel Fest in Los Angeles in December, but other than that our schedule is WIDE OPEN. We’re looking to play more festivals in the near future and probably do less long tours. We’ll see. Touring in a disease infested wasteland seems nice, but it might have some drawbacks.

E&D: Will you be coming back to Europe again soon?

Digestor: Highly possible, but I’m not sure I can say anything yet.

E&D: You toured Europe with Cannabis Corpse a few years, how did that tour go?

Digestor: Well I thought it was going to be an enjoyable experience and then that Landphil fellow kept talking about smoking drugs. Grass, reefer, devil’s lettuce…he did them all. A real nogoodnik. And here we were, just trying to relax and enjoy our jenkem.

E&D: How was the experience of touring with GWAR and Doyle a few years back?

Digestor: Zero casualties, so I call that a success! It took me a few weeks to get acclimated but once I got the routine down I barely even minded shining Balsac’s nuts every night. It would have been nice if they provided a rag or something, maybe some polish, but after a while I even started liking the taste. Doyle and his crew were extremely nice and barely present due to a tragic eye injury in the big (and I do mean big) man himself.

E&D: Who else have you loved touring and playing shows with and what made it so memorable?

Digestor: There have been so many great shows it’s hard to come up with one or two, but GWAR, Carcass, DRI, Municipal Waste, Toxic Holocaust, Skeletonwitch, and Black Dahlia Murder have all been amazing to tour and play shows with. One of my favorite shows ever though was at a punk warehouse in Oakland called Hazmat, which we played with the legendary FKU and Engorged on our first Weapons of Mosh Destruction tour. As Harald O says, the freaks were flying that night.

E&D: What have been some of the best shows that Ghoul have ever played?

Digestor: Any and all Maryland Deathfests, any shows at Burnt Ramen or Hazmat, and lots more. Some of the best shows are the ones are tiny clubs or backyard parties where there are too many people and not enough room onstage. We played a show in San Diego with Dr Know like that. Just sweaty and uncomfortable and tons of lunatics going crazy.

E&D: How have things been at home in Creepsylvania during the pandemic?

Digestor: Great, no one comes to Creepsylvania so we’ve had zero covid cases.

E&D: What would be the national anthem of Creepsylvania?

Digestor: Hail to Creepsylvania, of course! I could sing it in my sleep. It goes, Hail to Creepsylvaniaaaa, a land so brave and truuue! From the towering Volkov mountains, to the swamps awash in gooo! You are strong and…wait…no…You are…something, something…and your beets are… Ahh, let me go to sleep and I’ll get back to you.

E&D: What is the status of the new Ghoul full length album?

Digestor: Dead in the water.

E&D: You released the song ‘Nectarnomicon’ last year. How has that track been received?

Digestor: I don’t know if anyone even heard it! What did you think?

Digestor: Count on it.

E&D: You also released the track ‘Nazi Smasher’ a couple of years ago. How has that track gone down?

Digestor: It’s gone down as one of the greatest anti-fascist anthems of all time, AT LEAST THAT’S WHAT MY MOMMY SAYS!

E&D: What is your favourite way to kill and dispose of Nazi boneheads?

Digestor: Giant flame spewing, hammer swinging, death machine. That or a good old fashioned boot to the head. Or a witty bon mot is also good.

E&D: You released a split 7” with Ill Bill a couple of years back. How did that split release come about and did you meet Bill at all or since?

Digestor: We just asked him and he said yes! Fool! Naif! No, I kid. We are so excited to have a split with Ill Bill, an artist we really respect. Not like our other split with those slobs in Brody’s Militia.

E&D: Would you work with Ill Bill on a song with you both on it?

Digestor: It kind of depends on the song. I’m not that into the idea of a rap metal…oh who am I kidding? We recorded Word is Law! It’s rap metal! Yeah, we’d love to do a song with Ill Bill.

E&D: What other rappers would you like to work with or do a split with in the future?

E&D: I first heard Ghoul when you covered Megadeth’s ‘Skull Beneath Your Skin’ for the Thrash Or Be Thrashed: An International Tribute To Thrash compilation. Do you feel that appearance opened up Ghoul to a new audience worldwide?

Digestor: Possibly! I didn’t notice because I was huffing a LOT of paint at that time.

E&D: What was it about that song that made you want to cover it?

Digestor: It rules! I wish we played it better.

E&D: Ghoul have also covered songs from Misfits and Kim Wilde. What other songs would you love to give the Ghoul treatment  in the future?

Digestor: I want to cover Burt Bacharach’s ‘The World is a Circle’, but Cremator keeps telling me the world is actually a trapezoid, and I don’t know who to trust. Leaning towards Burt, but I will have to do some research and get back to you.

E&D: With the Kim Wilde track, what made you pick that song and were you a fan of the version by UK thrashers Lawnmower Deth?

Digestor: I never heard that version until after we recorded it, I swear. I think Fermentor wanted to cover it because he said Europeans would go crazy for it if we played it live, but Europeans go crazy for a lot of things we don’t care for: soccer, Jerry Lewis movies, suet-based foods, toilets with no seats, anachronistic monarchies, fascism, etc. etc.

E&D: What are your favourite thrash albums of all time?

Digestor: Megadeth: Rust in Peace, Slayer: South of Heaven, Sepultura: Beneath the Remains, Engorged: Where Monsters Dwell, Funerot: Invasion from the Death Dimension, Anthrax: Among the Living, Razor: Violent Restitution, FKU: Metal Moshing Mad, GWAR: Scumdogs of the Universe, Suicidal Tendencies: Suicidal Tendencies and Join the Army. I like crossover hardcore stuff more than straight Bay Area thrash type bands. Agnostic Front: Liberty and Justice For… is probably in my top five records of all time. I like when bands like MDC would do an album like This Blood’s For You and get metal for a second, and I feel like that spirit was continued with bands like Engorged who mixed death metal and thrash in an organic way.

E&D: What have been some of the highlights of your time in Ghoul so far?

Digestor: This interview is up there. Though, again, I’ve been huffing paint.