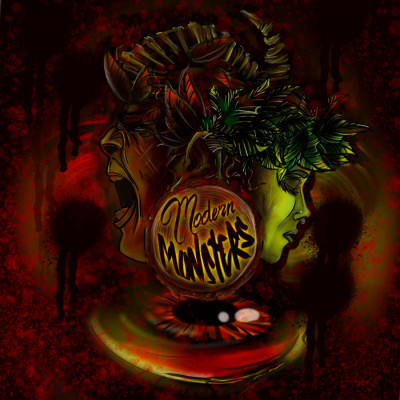 There’s that very gray area between hard rock and alternative metal. Why?

Well, for a reason that is very simple and complicated at the same time. It all depends on how much an artist draws from what usually falls within the hard rock and what elements of metal figure within the music.

In most cases it depends on ob the ratio, making the area between genres so gray and undefined.

This brings us to the Bay Area band Modern Monsters and their Self-Titled EP, which exists exactly in that very grey area, shifting in one direction at one moment, and moving into the other a few moments later. And then back.

In quite a few cases that is a perfect recipe for a disaster. If you want such music to succeed you need to work akin to medieval alchemists, not only mixing components but trying to keep them in a meticulous balance.

On this EP, Modern Monsters (Rich Wells- Guitar, Brody Bass – Bass, Keenan Tuohy- Drums, Josh Weaver- Vocals, Wyatt Lennon- Guitar) are in an obvious search for that balancing formula. The three tracks here, show that they just might be on the right track of finding it.

They try to mix the clear-sounding vocals with just the right amount of metal guitar riffs, and so far this approach is working for them.

It could be a combination of two factors – they try to work on the tracks as a full band and before recording anything see/hear how it all works on stage.

The three tracks here seem to have been fine-tuned to the band’s liking, and quite possibly also to the liking of their potential hard rock/alt-metal audience. Hopefully, they’ll keep it up.