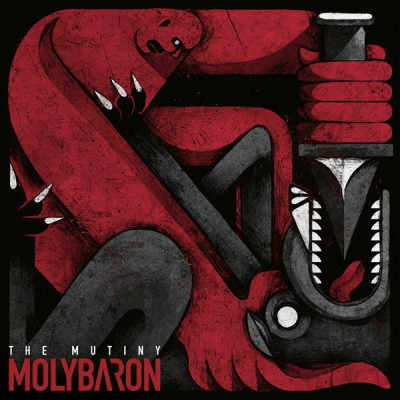 Like a massive energetic sonic force that rumbles upon your feet, Molybaron are quite an eruptive cannon blast waiting to happen. Formed in 2014 in Paris by Dublin singer/guitarist Gary Kelly and Parisian guitarist Steven Andre, their music goes from alternative, progressive, technical, and atmospheric anthems that would make your eyes wide open.

They released their sole self-titled debut album four years ago inspired by the 2016 U.S. election and tackling the mainstream media by making each situation worse than ever. Their debut received critical acclaim and led Molybaron doing support slots and music festivals. One of which included a European tour with New York’s own A Pale Horse Named Death in 2019.

Now in 2021, Molybaron are re-releasing their second album entitled The Unity. Released on the InsideOut label, it is a storytelling adventure filled with terror, dystopian landscapes, survival of the fittest, and abusive relationships. Gary knows the subject issues very well. It can be very difficult and very challenging to tackle those topics, but he and the bandmates want everything there on the kitchen table.

Alongside Gary and Steven, the other two are; Sébastien de Saint-Angel on Bass, and Camille Greneron on Drums. The Mutiny is not your typical prog-rock, alternative, and symphonic metal album, the genres are revealed inside the Earth’s core. It’s the band’s answer to King Arthur’s Knights of the Round Table with a brutal electronic vibe that is waiting to happen.

‘Amongst The Boys and The Dead Flowers’ has these arrangements with a gothic sound between the realms of the John Foxx-era of Ultravox and The Cult. Like something straight out the New 52-era of Barbara Gordon’s return as Batgirl, but suffering from PTSD after being paralyzed by The Joker in the controversial graphic novel The Killing Joke, Saint-Angel and the double guitar sounds go down in a driven arrangement with shrieking textures.

‘Prosperity Gospel’ is like walking on a dangerous tightrope. Gary’s vocals are very operatic as he sings those high notes very well. It becomes a circus show that you’ve been waiting for. With Clockwork Orange-like textures from the Ludovico treatment, you can imagine these gigantic sets of TVs revealing the bullshit that the left and right are revealing on cable news channels. But not showing the entire truth that they are hiding from the public to see.

‘The Lighthouse’ could had been written for the 2019 two-man of a play starring Robert Pattinson and Willem Dafoe. There is intensive heat coming from the band as they shine the light on the themes of abuse and begging for forgiveness. But the damage they’ve done to their victims, has already been done. And sorry isn’t good enough.

Nod to the Thrash Metal scene of Voivod’s Noise years from 1986 to 1988, ‘Lucifer’ is a revved up composition. With the Bass at the forefront, it adds up these fuel-engaging powder kegs for Greneron to make his drum kit sound like bullets ricocheting out of nowhere by shooting like a madman from the machine gun.

The opening track ‘Animals’ is a crossover between the Queen-like textures honoring Brian May’s sound and the swinging vibrations from the Diablo Swing Orchestra channeling the Pandora’s Pinata sessions that gives the quartet a chance to tip their hat to the Swedish Avant-Garde masters while ‘Slave to the Algorithim’ channels both the extreme metallic vibrations of Pantera and the dooming post-punk sounds of Violent Femmes’ ‘Color Me Once’.

But then once we get to ‘Something for the Pain’ Saint-Angel is like a snarling beast when it comes to his Bass making it sound like a monstrous roar as he turns up the heat gage as high as it can go. Swirling terror to exhibit these hallucinating nightmare, we feel as if Molybaron are continuing the stories of what is going on in Arkham Asylum with the villains and inmates have taken over the loony bin with an iron fist!

‘Twenty Four Hours’ is Molybaron channeling two legends, Rush, and the new wave of British Heavy Metal gods, Iron Maiden. For Gary and Steven, they lead both Sebastien and Camille into the bloodiest wars of all bloody wars channeling both the Fly By Night and The Number of the Beast-era rolled into one. So, you can imagine the quartet have done their homework very well to tip more of the hats to the masters by keeping their music alive.

The Mutiny is a big giant roller-coaster ride Molybaron created from scratch. This band will keep the fires burning more and more in the years to come. I can imagine there’s a massive shitload of 900 megawatts with pure metallic energy inside their veins. So turn this mo-fo up to a maximum volume level at a hundred!