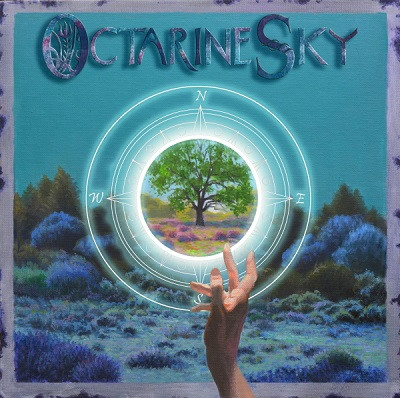 Close To Nearby by Octarine Sky

Potter Daughter’s Dyanne Potter Voegtlin and Jan-Christian Vögtlin formed Octarine Sky during the time they were creating their debut release, Close to Nearby. It is quite an amazing revelation. Like a flower that is ready to bloom, the guests including guitarists Guthrie Govan and Amit Chatterjee along with drummer Simon Phillips, it’s a combination. The artwork done by Armand Cabera, reveals to be an open window to a parallel universe filled with joy and happiness.

The music and stories that Octarine Sky has unleashed to the kitchen table, is an adventure waiting to be explored. ‘One’ which opens the album, is an arrangement of Alberto Ginastera’s first movement of ‘Piano Sonata no. 1’. It starts the album off with a big bang. Dyanne is like a stick of dynamite waiting to explode right in front of our very eyes.

She plays one of the most challenging composition as Phillips creates this intensive mouse chase on his drum kit as he helps her sets the clock to tick very rapidly with these Crimson-sque motifs channeling the Red period while Jan pours out his textures by calling to the gods up in heaven on ‘Rosewind’.

Gentle keyboard string beauty and epic midsection Dyanne shines magnificently for a soothing drive into the unknown with brutal raindrops appearing out of nowhere. Crawling behind your back, ‘Night Sky’ is a temperature rising effect with a nightmarish lullaby segment.

Govan’s shrieking textures give Dyanne momentum to follow him along with Jan’s Bass, and Simon’s workout. Flying from one corner to the next, ‘The Mask’ is like something straight out of Iamthemorning’s Lighthouse sessions. Dyanne is tipping her hat to the legendary Mariana Semkina as she fills the empty house before the waves crash before Christian’s narration describes the danger that awaits us.

This is where Octarine Sky goes for a texture that is brutal and sinister. And boy do they know their textures well. I wish it could had gone for about two minutes, instead for a couple of seconds. But man, that was unexpected. I hope they do another brutal composition in their next release one day.

‘5’ sees a return for a Jazz-Symphonic route. Dyanne’s vocals fill up the entire space as she lets Govan and Phillips channel each other on their instruments. Guthrie makes his guitar cry in the middle of the desert honoring the styles of Terje Rypdal with unexpected changes. ‘Midnight’ is inspired by
Edgar Allen Poe’s poem, The Raven. Now this is where Octarine Sky goes Arena Rock on yo’ ass!

I can imagine Jan and Dyanne listened to the first two Boston albums for inspiration as they channel both Peter Hammill and Tom Scholz’s arrangements. I can feel Guthrie tipping his hat to Tom’s sound as he soars even higher by spreading his wings to the heavenly skies.

Speaking of unexpected changes, ‘VII’ sees Dyanne channeling Simon and Jan by giving them full ammunition. Whenever she gives them the ammunition, she gives the nod to come in and out with militant tones. You can hear the Twilight Zone-sque sections as the group are sending us into a whirlpool of terror.

Eerie and chilling scenarios, the tribute to the Rock In Opposition movement is kicked in as Guthrie channels Roger Trigaux’s Present with nightmarish atmospheres while the synthesizers go into a wacky Emerson-like sound that is batshit crazy! Because you never know when the monster will peak out and attack at any second.

‘Hold’ closes the album in the style of Kate Bush’s ‘This Woman’s Work’ from her 1989 release, The Sensual World. Dyanne channels Bush’s vision as she pours her heart in Dubiel’s lyrics as Amit follows in the footsteps of Holdsworth’s SynthAxe.

Close to Nearby is quite the story-telling / instrumental trip that Octarine Sky (Potter’s Daughter) have unleashed this year by bringing these ideas to life. This is how an album should be told. Filled with passion, heart, energy, brutal forces, and epic adventures. Octarine Sky is the real deal!