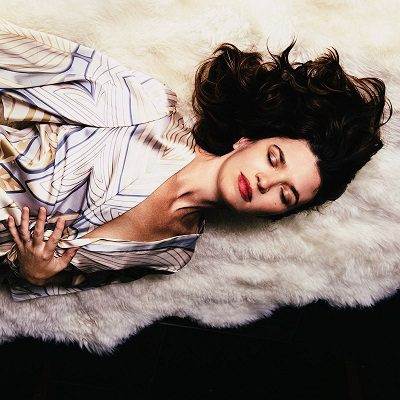 Blue To Gold by Sarah Perrotta

Sarah Perrotta is a name you may not be familiar with. She’s from the Hudson Valley and was born into a musical family. Her grandfather taught her how to play the piano at the age of four in one of her first piano lessons. She then studied classical piano and played in several bands when she was in High School and toured European cathedrals and at concert halls when she was fifteen.

After earning a degree in Jazz Studies from The State University of New York at New Paltz, she released her debut album in 2000 with her indie band, Outloud Dreamer entitled, Drink The Sky. The album received critical acclaim. Not only it was included as Best Modern Rock album of the year, but she would sit in and study piano from the legendary Garth Hudson of The Band.

Her next album, The Well, featured Stick Men bassist Tony Levin and was recorded at Leopard Studio in Stone Ridge, New York. She toured internationally with Barenaked Ladies, Broken Social Scene, and Jason Colette to name a few. And her music would later be featured in NBC Adventure Sports and Surfing competitions. Her third release, Tonight sees Sarah moving away from piano to keyboards and delving into a true rock atmosphere.

Now in 2021, Sarah has released her fourth studio album on Trey Gunn’s 7D sub-label, Third Star Records entitled, Blue To Gold. She has upped her game with her new release. While the cover strikes a small resemblance to Roxy Music’s 1972 sole self-titled debut, there is something brilliant that she’s unleashed on her lyrical structures.

It’s almost as if she’s bringing these stories to life as an imaginative short film that isn’t Disney-sque, but with heart and passion. And to be allowed to have alongside Tony, but Jerry Marrotta on the production level, Gerry Leonard, Daniel Weiss, Marc Shulman, Sara Lee, Rupert Greenall, and Bill Dillon lending Perrotta a helping hand to bring her fourth studio album to life as if it was a flower blooming brilliantly.

Sarah named her album as a chance to have people transform themselves into a different form of value and beauty. The songs are based on relationships and life experiences she had encountered before. And the centerpieces on Blue To Gold, will tug your heart for many, many years.

‘Echo of Joy’ is a slowed-down ballad. It’s about a hope of finding happiness in their own personal lives and not make the same mistake before. With its dancing mid-tempo, I can imagine that it is Gerry channeling his slide guitar techniques in the styles of The Last Hurrah’s ‘The Weight of the Moon’ from the Mudflowers album.

‘Firestorm’ sees Sarah entering the dark side of a race car driver who not only has achieved success, but has a huge amount of skeletons in the closet he doesn’t want the public and the media to know about.

I can imagine Sarah had listened to Talk Talk’s album, The Colour of Spring for inspiration as she tips her hat to the late, great Mark Hollis by channeling his songwriting technique to capture that spirit of what their music had meant for her. Speaking of Talk Talk, ‘Spectrum of Color’ takes us into the heart of the jungle thanks to the heart-beating percussion work, bass, and lifting keyboard sound revealing its true glory.

She channels Nina Simone in this song as it sung in the styles of both ‘Four Women’ and ‘Give It Up’. ‘The Other Side’ begins with a lullaby piano introduction as if Sarah is singing her newborn to calm her down and go to sleep.

The song deals with being trapped in this lonely room with no chance of escaping as the subject matters of fame and fortune, comes at a heavy price. Sarah goes into full detail on what’s like to be famous, and it isn’t pretty. The mellotron sets up this prison-like mansion that you’re in as the press and paparazzi are like wolves ready to hunt its prey by revealing the celebrities downfall in front of the public to see on television.

‘The Wilderness’ deals with the loss of a loved one. Sarah asks the question about the person’s return and whether he has changed, or becoming even more abusive than ever before. Sarah lays down the law with these militant tones as she uses a toy piano to set up these raindrop effects while the haunting melodies fills in these acoustic hallways.

Sarah has come a long, long way. She has proven to be one of the most incredible artists that I’ve listened to. She proves that she isn’t just a genre artist, but taking it a step further. Blue To Gold is a story-telling album at its finest. And I hope to hear more from her in the years to come.