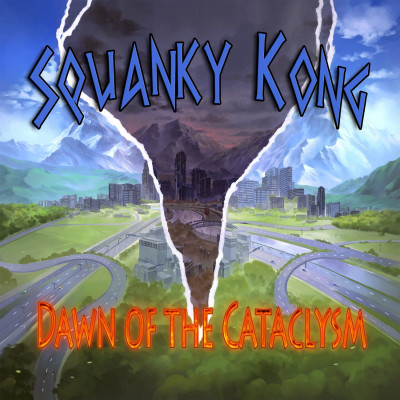 Dawn of the Cataclysm by Squanky Kong

Quite a few hard rock/heavy metal fans like their music neatly classified, divided into sub-genres or sub-sub-genres.

So, what happens when they encounter an album or an artist that likes to mix up a few of those? Do they just skip them, stop listening, or what?

To cover this gap somebody came up with the term hybrid rock, another, maybe not so neat a category, but certainly one nonetheless. Maybe that is exactly where we can fit Los Angeles artist Squanky Kong and his/their album ‘Dawn of the Cataclysm.’

Why this singularity/plurality? Because behind the moniker is one James Michael House (guitar, six-string bass, and synthesizer), who recorded this album with a revolving cast of other musicians, without whom this album would sound too much like Boston.

And when we mention Boston, not that Squanky Kong shies away from that melodic hard rock side of things, it is just that he goes all over the heavy spectrum from Tool and Incubus to Mr Bungle, adding a bit of modern prog along the way, courtesy of the likes of Muse, for example.

Adding to the complexity of the music is the themes House covers here saying that ‘Dawn of the Cataclysm’ “originated in 2019 before the pandemic started. Topics such as climate change, plastic pollution, war, corruption, and artificial intelligence were inspirations for the album concept as a whole.”

Of course, venturing into such a hybrid genre combination requires some instrumental virtuosity, and House or his collaborators lack it, on the contrary.

In essence, Squanky Kong and his album make the case that we should forget genre classification and just listen.