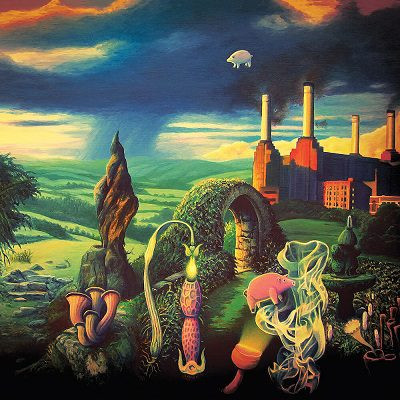 Animals Reimagined: A Tribute to Pink Floyd by Various Artists

I always tend to avoid tribute albums because I prefer to keep the classic as the way it was meant to be. Because it tends to hear both artists and musicians trying the best they can to give it a powerful force to the composition, but it drags very hard. And that one is Pink Floyd’s 1977 dark masterpiece, Animals. The album is one of the band’s finest hour, the tribute album entitled Animals Reimagined: A Tribute to Pink Floyd released on the Cleopatra label is something else.

While there are some of the most important figures from Jordan Rudess, Al Di Meola, James LaBrie, Jan Akkerman, Billy Cobham, Vinnie Moore, Martin Barre, and Arthur Brown, who do a good job and do the best they can to stay true to the vision of the lyrical arrangements Roger Waters brought to the visions of Orwell’s Animal Farm, the problem is that the original album can be quite the challenge to bring it to life.

Listening to the tribute album is like looking at someone else’s living room in an abandoned mansion for about 43 minutes filled with nothing. And it has come up with dust. Nick van Eede’s take of ‘Pigs on the Wing Part 1’ with Martin Barre’s flamenco guitar intro is like a calm before the storm, but it sounds too lukewarm from the electric keyboards.

I was listening to that thinking, “No, that’s not what is supposed to be, it’s supposed to be Acoustic guitar only, not as a sun rising effect.” Now onto ‘Dogs’. It’s great hearing the minor chords from Vinnie Moore’s intensive acoustic guitar and Rudess setting up the eerie Big Brother scenario from 1984, but Rainbow alumni Graham Bonnett struggles very hard by dragging the song into the mud very quickly.

What’s missing? Where’s the maniac laugh Roger came up with from the 17-minute track in the background during Gilmour’s blistering textures? I didn’t hear that from Bonnet. A piece of the puzzle is missing from the song. Moore knocks it out of the ball park by channeling the visions of Gilmour’s nightmarish world thanks to this beautiful string section and Pat Mastelotto knocking it out of the ball park with his incredible drum work.

This is where it gets interesting. The electric guitar part should have come later right after the acoustic sounds and dogs barking. Little bit of a misstep right there, but the blistering textures come right at you with Kasim Sulton’s up-and-down bass lines. Rudess synthesizers sets up the camera lights flashing as security with this alarming futuristic atmosphere that no one is supposed to be here.

Jordan does a spectacular job creating the scenery with his keyboard and piano playing. I wished they added another vocalist instead of Bonnet. That was a bit of a letdown for not adding another vocalist to sing the last two sections of ‘Dogs’ by giving it a home run until the very end. Too much virtuosic guitar playing from Moore. I wish he would calm down and give it a real honor to David’s playing, not make it sound like Joe Satriani. One’s enough, a lot’s impossible.

‘Pigs (Thee Different Ones)’ starts off very good at first with Bouchard’s bass playing setting up the fires to burn more and more for LaBrie kicking into full gear honoring Waters’ vocal arrangements. Di Meola brings the fiery vibrations during the midsection including the clock-ticking cowbell Cobham creates. I wish they used the Leslie Speaker to create that spooky scenery for LaBrie’s vocals instead of a reverb double-tracking sound.

Moraz tries his best to create the talkbox sound on his keyboards, but it falls very hard. Patrick for me just didn’t click with this song. It’s okay, but it sounds too grandiose and too orchestral. Not a very good idea to recreate that sound in the instrumental segment. Its sound like if you’re driving off the edge of the Grand Canyon without using a parachute and having no chance of landing at the bottom while you fall towards your doom.

‘Sheep’ is starts to go off to a bad start. Rick Wakeman does an okay job, but Akkerman comes in at a bad time. I don’t know why Jan, who is for me a brilliant guitar player, but he didn’t need to add textures to Rick’s keyboards. It didn’t need to be there, but Brown nails it to a pulse describing the terror that’s going on in the streets.

The instrumental piece between Akkerman and Wakeman’s cavernous atmosphere adds the tension with a knife while Appice knocks it out again before Rick brutal organ work with Arthur snarls at the very end before letting out a scream as Jan, Carmine, and Rick finish with Rick channeling the riffs in a maximum explosion with Brown’s screaming section in hot pursuit.

‘Pigs on the Wing, Part 2’ closes the album with Albert Lee, and Yes’ Jon Davison and Billy Sherwood. This is where it goes completely off. Jon is singing the first part of ‘Pigs on the Wing’ instead of the reprise. It sounds too much of dry land without a chance to land on a pile of hay. Something is way, way off on the closing track.

The visions of Pink Floyd’s dark masterpiece is missing. This is almost like a complete nightmare brought to life. I can only imagine that while Pink Floyd’s Animals had a huge impact on plenty of people that had as a soundtrack to their lives, a tribute album doesn’t have the motivation to bring it to life. There’s no urgency to rush it through.

The biggest disappointments are Nick van Eede, Graham Bonnet, Jon Davison, Billy Sherwood, and Patrick Moraz. They really, really missed a chance with Animals Reimagined. I know they tried everything to stay true to the albums vision, but it is a lump of nothingness that is brought to the kitchen table uncooked by eating a lump of coal and an overcooked steak that is so hard to chew with so much listening time.

The question that I have for the label is this, if you want to honor Pink Floyd’s music, why make it this way? Do you want to honor their legacy? There are dozens of artists and musicians in the Prog and Hard Rock community who can knock it out of the ball park with the Animals Reimagined album and do a much better job. Animals Reimagined is the answer to the 1990 flop, The Bonfire of the Vanities.