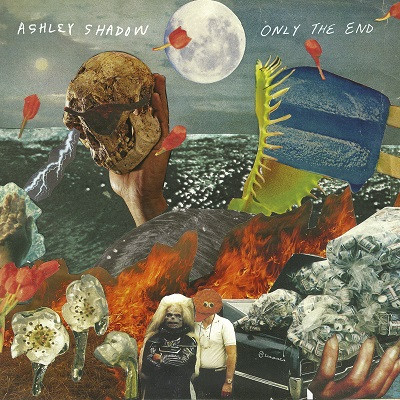 Only The End by Ashley Shadow

As I went for my morning walk prior before the day of Thanksgiving, something happened when I heard an artist that had a lot of beauty, heart-filled textures, and elements between folk, Barrett-sque structures, and mournful arrangements that’ll make you bring out a lot of Kleenex boxes. Vancouver’s own Ashley Shadow known as Ashley Shadow Webber, is the twin sister of Black Mountain / Lightning Dust vocalist, Amber Webber.

She has released her follow-up to her sole self-titled debut from 2016 entitled, Only The End on the Felte label. This is her sophomore attempt to describe themes of re-silence, triumph, and renewal. Detailing the painful and tragic experiences that Ashley went through, Only The End is a heartfelt release during these tricky times that has been going on.

For Ashley, she brings those experiences head-on. Knowing that she’s fighting back really strong. And to be allowed to have Neko Case’s Paul Rigby, Elastic Stars’ Colin Cowan, Black Mountain’s Joshua Wells, Himalayan Bears’ Ryan Beattie, and Bonnie “Price” Billy, they lend Ashely a helping hand to bring her second album to life.

‘Catlin’ goes into a musical sermon that Ashley brings into a Sunday morning service in Church. You can feel touches of the Rolling Stones’ ‘Love in Vain’ from the Let It Bleed album. I always imagine Gram Parsons lending help on the production of the album to add this organ ride into the sunset as Ashley heads off into a new chapter in her life.

Bonnie takes Ashley into an Americana walk into the Nevada desert with some Roy Orbison textures as if his spirits watches over them by doing this beautiful duet on ‘Don’t Slow Me Down’. You feel the sliding textures and the strumming up-and-down guitar walk to the light at the end of the tunnel.

‘From You’ is told through the eyes of a woman who is fed up with all of the bullshit that her boyfriend is doing behind her back by becoming a womanizer and being a heavy drinker. With Ashley’s composition, it is an emotional and brutal ballad that goes through this complicated relationship before it becomes a straw that broke the camel’s back.

And this time it’s personal. I imagine she is fed up with the lies, nonsense, the women going into their bedroom and doing their do-da’s. But once the tabloids come in, that’s where she leaves her irresponsible boyfriend for good, and never turning back. ‘I Will Remember’ goes into a CSNY route of ‘Our House’.

Shadow has done her homework to revisit Laurel Canyon with Joni Mitchell’s textures thrown into the song as ‘Unspoken’ sees Ashley tipping her hat to the legendary Ray Davies. She sings in the lyrical styles of The Kinks’ ‘Don’t You Fret’ with a booming march from the drums and a slowed-down psych groove with heavy fuzz-tone sounds on the guitar that comes at you with an erupting roar.

Ashley Shadow has come a long way. She really brings a lot of energy and brainstorming ideas that she’s brought to Only The End. It is a compelling release that will be talked about in the years to come.