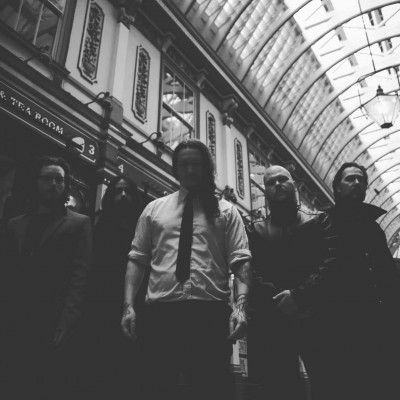 We are all music lovers and often immerse ourselves in that world and, as listeners, we are wide in our consumption of styes and genres so it only makes sense that we incorporate this into the sound of Voices.

Voices have just released their stunning new album Breaking The Trauma Bond and it is an intense listening experience, packed full of the dark avant-garde metal that the band are renowned for. Gavin Brown had a chat all about the new album with guitarist Sam Loynes, who told all about its creation and influences as well as telling us about Voices return to the stage, the influence of David Lynch on their music and their London hometown.

E&D: Your new album Breaking The Trauma Bond is out now. How did the making of the go?

Sam: It was a long and fractured process over lockdown. We had many elements done remotely which was an interesting way to work. It also helped to detach a solid direction for the sound.

E&D: The album is very dark throughout. What subjects do the songs on the album deal with?

Sam: We shied away from dealing with any specific ‘real world’ or conceptual notions on this one. It is completely free form and more of a stream of consciousness approach. It’s really revealing hearing how people interpret the material and give us further, if any, clarity.

E&D: You have a range of electronic music elements on the album such as the almost drum & bass drum breaks on the title track. Did you always want to incorporate electronic influences with the extreme metal?

Sam: Like with Akercocke, we really let any musical texture, genre or feel to come into the sound. The expression is what drives us and if that is via electronic beats, slow drones or killer blast laden riffing, then we’re open to all. We are all music lovers and often immerse ourselves in that world and, as listeners, we are wide in our consumption of styes and genres so it only makes sense that we incorporate this into the sound of Voices.

E&D: Did you want to make the album as eclectic as possible when you were creating it?

Sam: We didn’t strive to be eclectic from the outset but we are more than aware of the inevitability, again, due to the vast terrain we are influenced and driven by creatively and emotionally.

E&D: You’ve talked about David Lunch being an influence. What is it about his films that you love?

Sam: Lynch is probably the most tangle place to seek a source of the madness behind Breaking The Trauma Bond. In a similar way to many of Lynch’s work you’d be best to not try and decode all that is going on. We can’t see outside of the chaos of this record either. It’s an experiential piece and should be consumed in the same manner that you may consume Lost Highway or Eraserhead or Twin Peaks.

E&D: What are your favourite David Lynch films?

Sam: Personally, my favourite is Eraserhead. This film opened up new worlds for me. I had never engaged with surrealist cinema before seeing this film, on VHS at the time, and whilst it jolted me to my very soul, I was instantly hooked. The audiovisual pairing, the non-linear structure and the inexplicable world he created is a truly masterful thing.

E&D: What other are some of the things that influenced the sound of the album?

Sam: Of course, the status of the world during the creation of the record informed how it sounded. So here, it is less about the musical influences but rather the navigation of the terrain of a pandemic constricted world.

E&D: Have you been pleased with the reaction to Breaking The Trauma Bond so far?

Sam: We are very aware of how this record is already moving people very deeply. We hope it is largely a positive experience for people and perhaps that they can lean on it to summon something beautiful. We are humbled by the response.

E&D: This is your fourth album, how do you think that the sound of Voices has evolved in that time?

Sam: I’m not so certain of seeing it as an evolution but rather a refining. A band’s sound, outlook and work ebbs and flows with time. I think it is fair to say that this one is the richest sound we have captured however.

E&D: You released the album London in 2014. What are your favourite things about the capital and places to go?

Sam: London is a difficult, pulsating being. Naturally, there are still things about the city that we all love… The potential for adventure, the sensory stimuli and audiovisual overload. It is also a very difficult landscape to navigate from a spiritual sense, if I am going to be serious for a second then I personally love The Black Heart pub in Camden.

E&D: What would you recommend for a metal fan to check out in London?

Sam: I would take a trip the The Barbican estate. The architecture alone makes you feel like you are in a science fiction dystopia.

E&D: Breaking The Trauma Bond has to be one of the best metal albums of last year. What albums have been your favourites last year?

Sam: Thank you for saying. There are so many great albums dropping as the world has engaged with writing material during the lockdown times. Personally, the latest album from UK Hip-Hop artist Little Simz, entitled Sometimes I Might Be An Introvert is a particularly special work. Also, James Blake’s Friends That Break Your Heart is a beautiful yet challenging listen… In terms of metal then I would say the most interesting thing I have heard in a while is Cryptic Shifts Visitations From Enceladus is in a league of its own.

E&D: You released a t-shirt to raise awareness about dementia. How has that campaign gone?

Sam: Incredibly well. We raised a bunch of money for the charity and also had many collaborators on board to help us get the word out. It was a really special moment in history of Voices.

E&D: You played in London at the end of August. How did that show go and how good was it to be on the stage again?

Sam: It felt amazing and our hometown shows can be such a rewarding thing. After such a long time being at home with our music it was an amazingly refreshing feeling to create such unholy noise in front of so many people again.

E&D: What are your plans for live shows this year and will you be playing a lot of material from Breaking The Trauma Bond?

Sam: We’ll do anything we can that fits the bill. We have, with luck, a few European festivals like Metal Days and Brutal Assault and again, if the tides remain calm then we’ll be hitting UK venues soon. Songs from Breaking The Trauma Bond will certainly feature in the setlist.

Sam: Try not to die.

E&D: What have been some of the most memorable moments in your music career so far?

Sam: I think one of the most memorable moments for us was when we played with Deafheaven at an appropriately named venue in London called ‘Heaven’ and we were largely unknown. We chose to play a particularly uncompromising set and we have never seen over 800 people look so confused and yet, somehow intrigued, at what they had just been put through.