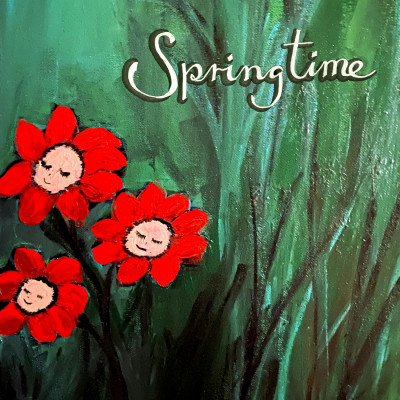 Naming your band Springtime can be an indication in which direction your music will go, but then, it doesn’t necessarily have to.

In this case, it is probably best to see if any of the players’ names ring familiar to give you an indication in which direction the whole thing will go to. Yet, even then, you simply cannot be sure what you’re going to hear.

This is probably not the first time somebody has used springtime as the band name, but if you look at the names of this trio, something just might click.

You see, even with their other bands Liddiard, White and Abrahams go over the place – from art-rock to improvised jazz via all things that include straightforward melody, these guys have done it all.

And that is exactly what they do here. First of all, it is mostly vocal music, that somebody like Nick Cave or PJ Harvey would be quite proud of. Or, it could be the king of dark-tinged folk like Will Oldham, whose ‘West Palm Beach’ Springtime cover here.

Yet throughout the trio brings in a wide array of instrumental elements so characteristic for their other artistic ventures, without sounding too much like any of them in particular, but also all of them at the same time.

Quite an intriguing musical venture.