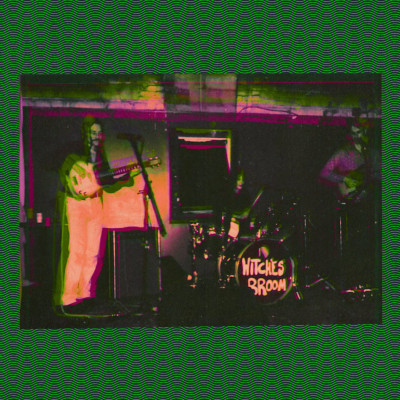 If ever a band name sounded like it belonged to some hoary old beards dragging out yet another riff to infinitum all in the name of doom, it would be Witches Broom. But no, cast your ears this way and listen to the hottest new sounds from Southern Maine, mainlining pure 60’s garage rock, ripped straight out of the Seeds rule book and filtered straight through yet another Nuggets compilation. It’s as if the last 50 years never happened as the band throw their anthems of teenage angst and partying right at your face.

Screeching guitars ushering in ‘Tell Your Boyfriend’, or jagged riffs purposely causing a riot on ‘Pill’, these kids have got what it takes to set the world on fire. Start a riot, crash a party, invite The Fugs. Listen to those stabs of organ infiltrate your brain in a steady stream of inoculated fever. This stuff is hot, hot , hot and burns a hole right through your brain.

‘I Need’ betrays its stroppiness in a sardonic vocal, counterbalanced by the frantic ‘Night Wish’ which invites you to all those classic 60’s shindigs where too cool kids two step to the latest sounds. Its a moment which belies the brevity of the album as its progressive riff stretches out to infinity. ‘Here He Come’ channels early The Who with its Mod like delivery which sounds slightly out of place here. Each track is a two minute wonder, all wrapped up in a glorious analogue fuzz. Listen to the keys on ‘Got Me High’…man, that shit rocks.

Reissued via Cardinal Fuzz, its rare you find some garage rock as vital as this these days. It’s sound harks back to a classic era and makes absolutely no attempt to update it, and why should it when it sounds just as perfect as it is. It’s a short burst of vitality at 23 minutes, but you know, brevity keeps boredom away. Maybe album reviews should be just as brief.