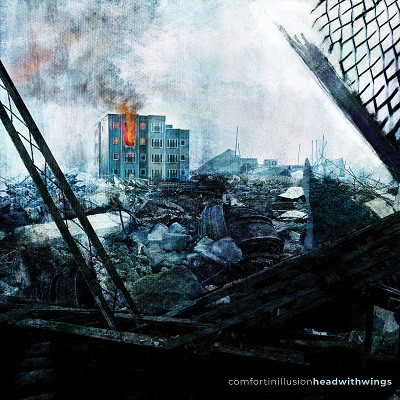 Comfort in Illusion by Head with Wings

Recorded between December 2019 and March 2020 at Silver Bullet Studios in Burlington, Connecticut, Head with Wings‘ latest EP Comfort in Illusion bridges the aspects over the loss of innocence. The band know these situations of what was, was, is now in complete forgotten aspects in the middle of a struggle to survive in this Orwellian nightmare that he’s envisioned in his novel, 1984.

Taking the high road between Haken, early Zeppelin, and Von Hertzen Brothers, the opening track ‘Of Uncertainty’ is an ominous introduction. You feel the characterisation of this woman driving in the heart of Nevada’s deserted highway filled with emotion and intensive playing from Mike Short and Brandon Cousino.

Josh’s vocals feels sympathy with this character not knowing where the future will hold for her after surviving this abusive relationship she went through after fighting back with a heavy punch. You can hear aspects of Phideaux’s Snowtorch-era as Testa’s drumming changes pace for Josh pouring his heart and soul in his vocal arrangements.

‘Contemplating the Loop’ is an acoustic ballad. There’s some alternative drives that Head with Wings walk into. Hill’s bass in the intro sets up this fire ready to burst in the middle of a forest that explodes like a nuclear bomb. Josh comes at you like a cannon blast with heavy detailed lyrics that has these soft and erupting momentum that he has in his vocals.

The closing track, ‘In a House without Clocks’, it starts off with these news channel radio stations changing from channel to another while these backward guitar like section comes in for a brief second. The band burst the door down with a giant battering ram. With bits of Tool’s Undertow-era, Head with Wings have a lot of great momentum to bring the story to an end.

These guys know the combination between prog, alternative, and hard rock very well. They have a lot of great ideas they’ve brought to the table. And I hope to hear more from them in the roaring ‘20s.